The Psychology of Terrorism: Individuals and Terrorist Groups 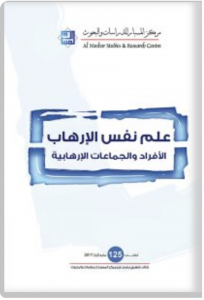 The psychology of terrorism is a nascent field in psychological scholarship. It has emerged in recent years as part of an effort to understand the multi-layered phenomenon of terrorism more scientifically  — from organized terror to “lone wolves,” and down to the character and mindset of the terrorists themselves.

No consensus has yet been reached as to whether terrorists, psychologically speaking, are inherently unstable. On one hand, they understand the nature of deeds they participate in. On the other hand, forms of “mental illness” often coincide with the terrorist impulse. The notion that a problem normally treated as a political or security matter may be at heart a clinical one is not without controversy, both in scholarly and policy realms. Al-Mesbar’s 125th monthly book — “The Psychology of Terrorism: Individuals and Terrorist Groups” — does not aim to resolve an ongoing scholarly debate, but rather more modestly to highlight the range of views.

Some researchers who contributed to the book view terrorists as “psychopaths” who lack the capacity to reason morally or empathically — the essential traits which inhibit mentally stable people from killing in cold blood. Others believe terrorists are “ill,” selfish, and narcissistic.

A different strand of contributors, by contrast, caution that such findings may unintentionally excuse if not justify terrorism. Experts who have closely followed Osama bin Laden, for example find it difficult to frame his transition to terrorism in terms of “mental illness.”

The book also reviews how the tools of psychoanalysis have been more specifically applied to the study of terrorism. The subjects covered include, “Terror groups’ psychology  and motives for joining;” “The psychology of terrorism: aggressiveness and narcissistic anger;” “Suicide attackers and lone wolves: Are they psychopaths?” “Psychological and social factors that enhance extremism among youth;” “Terrorist mentality: review of psychological literature;” and “The management of reason in combating terrorism.”

One study, approaching its subject through the discipline of “group psychology,” asks what makes a terrorist organization different from other organizations. It finds, among the distinguishing factors, the phenomenon of “structural fanaticism,” which can be parsed  trilaterally: the fanatical “us,” the relationship with the Emir or leader, and the relationship among members.  The fanatical “us” becomes a kind of infallible consciousness, bound together by a supreme message that is perceived by members as the absolute truth. An “us vs them” outlook fuels a thirst, shared by all members of the group, to erase the “other.”

Several psychological theories have been presented to understand the “terrorist character.” The book draws attention to four: “Frustration-aggressiveness,” “Narcissistic rage,” “the theory of authoritarianism,” and the “theory of social identity.”

Terrorist groups have attracted young recruits from across the world — raising the question as to whether any common threads, transcending societal difference, bring the diverse assemblage together. Among Western jihadists, does the attraction to terror reflect a crisis of values and modernity? French scholar Olivier Roy argues that the terrorist impulse is fraught with contradiction.

Turning to the phenomenon of suicide attacks, psychologist Fathi bin Salama finds that young people drawn to such missions tend to feel that it elevates their status from “human” to “super-human.” Their ideas about the “after-life” are of course informed by the rhetoric of clerics, who often mix reality and fiction. The boundaries between life and death are blurred.

The center would like to thank all scholars who contributed to this book, especially Dr. Rita Faraj who coordinated the publication.