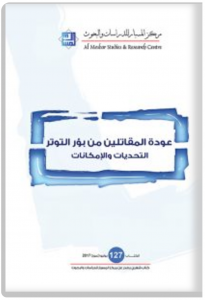 The crisis in Syria — together with the broader escalation in Islamist militancy, proxy wars, and shifting political alignments — has radically altered the regional map. The “Islamic State” has exerted control over swaths of territory in Iraq and Syria, attracting thousands of fighters from different nationalities who answered the call of a self-proclaimed “Caliph.” This mobilization, in addition to other political and regional factors, has led to an increase in jihadist, and anti-jihadist, polarization along the borders of conflict zones. Meanwhile, several Arab and European states are presently alarmed by the dangers of returning fighters following their years of war abroad.

Though the spread of nationalities in present-day globalized jihad is unprecedented, the phenomenon of “returning foreign fighters” from a jihadist war front is not new. During the 1980s and ‘90s, the term “Afghan Arabs” was used to describe Arab nationals who flocked to Afghanistan to fight the Soviets. Upon returning to their countries, they became a lethal danger.

In Al Mesbar’s 127th book (July 2017) — Returning Fighters from Conflict Zones: Challenges and Capacities — the current crop of jihadist returnees are considered in light of their historical precedents, such as the Algerian “Afghan Arabs” who returned to their native soil between 1989 and 2003. Scholarly contributions to the book trace the jihadists’ organizational loyalties and the process that led to their radicalization. Chapters also explore the motives and dynamics of their organized activities, the phenomenon of jihadist sleeper cells in Europe, and the religio-cultural challenges states face when fighters return.

Other issues addressed in the book include the history of foreign jihadist recruitment in Syria following the militarization of the popular protests, the geographic distribution of fighters in conflict zones, terrorism in Western countries, and strategies of amnesty and rehabilitation for returning fighters.

One study tackles the process of de-radicalization, distinguishing between individualistic and collective motivations for fighters to abandon jihadism. The study finds that some of the most successful de-radicalization efforts  exploited the inherent tension between an individual’s aspiration for success and his failure to translate it into reality within the jihadist milieu. As the gap between what a given organization preaches and actually practices continues to grow, this approach to de-radicalization will likely gain in importance and efficacy.

Foreign fighters are a global security priority, particularly in Europe. While there are no accurate statistics on the exact number of foreign fighters who have joined armed jihadist groups, assessments put the number at more than 30,000 people from 100 countries, 20 percent of whom hail from Europe. France alone has seen 1,700 of its citizens flock to Jihad. Both Germany and UK believe that around 760 of their respective citizens are among the fighters ranks. Belgium, Sweden, Austria, and the Netherlands estimate 470, 300, 300, and 250 respectively.

The most daunting challenge in this realm facing Europe and the world is the new manifestations of terrorism employed by ISIS: sleeper cells, lone wolves, the use of cars to attack pedestrians, and knife-wielding attacks.

The book goes on to examine strategies and prevention methodologies taken by three states: Tunisia, Morocco, and Algeria. It notes that despite a relatively liberal culture in Tunisia, the country is proportionately the largest producer of foreign fighters in Syria. New challenges ahead for Tunisia in attempting to stem this trend include a review of the country’s education system. In Morocco, a look at the geographical distribution of foreign fighters’ points of origin since 2014 shows the dominant role of the cities of Sebta, Malilia, Tangier, Al-Madhiq, Tatwan, Sale, and Fez. The Moroccan case is also explored in terms of the kingdom’s counter-radicalization measures. In addition to strengthening the security apparatus and border control, religious reform measures have been enacted in an attempt to prevent certain ideological groups from exploiting the crisis. The Ministry of Religious Affairs in Morocco has undergone a restructuring that allowed scholars to play a more active role in reforming school curriculum and monitoring mosques and sermons.

Al Mesbar Center would like to thank all the authors and contributors to this book — and especially Mohamed al-Haddad, who supervised their contributions, and Ibrahim Ameen Nimer, who coordinated the book.