Sectarian and Ethnic Diversity in the Gulf 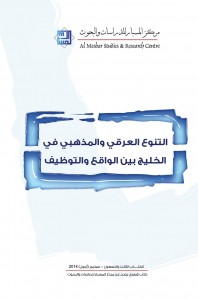 Non-Sunni and non-Arab minorities in the Gulf states have become a subject of unprecedented international attention in recent years — particularly amid Iranian intervention in the region and international human rights reports on their status. From our standpoint as members and students of Gulf society, designating these elements as “minority” communities is itself a choice that diminishes their equal status as citizens vis a vis the “majority.” We adopt the term nonetheless, for purposes of engaging an ongoing discussion, in Al-Mesbar’s 93rd monthly book, Sectarian and Religious Diversity in the Gulf. We publish this collection of studies a time of great turbulence in the region, in which sectarian and ethnic tensions are being stoked and manipulated by a variety of players. By shedding light on the complex makeup of Gulf societies, the book enriches the discussion of how these societies can manage their differences and negotiate their own cohesion — and insulate themselves from foreign manipulation.

The book opens with Bahraini researcher Abbas Murshid’s study, “The Arabian Gulf: Religious Groups and the Policies of Governing Regimes.” He examines the relationship between minority and national identity, and the tension between a minority community’s impulse to maintain cohesion and its aspiration to integrate into the majority culture.

We have sparse knowledge about Jews in the Arabian Peninsula — hence the importance of Kuwaiti researcher Yusif Al-Mutayri’s paper, “Jews of Kuwait: Presence, Situation, and Emigration (1860-1952)”. He explores the socio-economic experience of the Jews of Kuwait, beginning with the circumstances of their arrival in the country and culminating with their emigration. He also highlights the historically tolerant nature of Kuwaiti society which allowed them to play a meaningful economic role in the country and practice their faith.  He examines the influence of the majority culture on the lifestyle of the Jewish community, and concludes with an assessment of how the Arab-Israeli conflict influenced their migration.

When discussing Shi’a in Saudi Arabia, the first community that comes to mind is the Twelver Shi’a of the Eastern province. But there are also Twelver Shia in Madinah, and Ismaili Shi’a in the Southern city of Najran. (Saudi Arabia does not designate sectarian identity in its official census, so no official statistics are available about their numbers.) Yemeni researcher Anwar Al-Khodari’s paper, “The Ismailis of Saudi Arabia: Existence and Co-Existence,” provides an overview of the region they live in as well as their history, from the end of the ninth century CE through the dawn of the first Saudi state, when the Yam tribe –- much of it Ismaili –- threatened Al-Dir’iyya, the first Saudi capital, in the 18th century. He then moves on to the relationships between Isma’ilis and the founder of the modern Saudi kingdom, King Abdulaziz Al Saud.

Oman has managed to transcend religious difference to a comparatively high degree, despite its situation in the midst of an Arab cultural environment where the values of tolerance and co-existence are challenged by sectarian tensions. “Ibadis in the Sultanate of Oman: Religious and Sectarian co-existence” examines why that is the case. The author of the study, Jordanian researcher Muhammad Al-Awawidah, attributes the phenomenon to the tolerant nature of Ibadis, as well as official Omani policies aiming to steer clear of regional conflicts. He finds a conscious effort on the part of the country’s leadership to refrain from imposing Ibadi sectarian hegemony, adopt a policy of neutrality with respect to differences in creed, and hire civil servants on the basis of merit.

Independent Saudi researcher Abdullah Al-Rashid contributes the paper, “The Gulf Muslim Brotherhood’s Position on Minorities: The Case of Saudi Arabia.” He exposes the debates among various factions of Islamists in Saudi Arabia — between the Saruris, who base their relationship to others on creed; and the Brotherhood, which minimizes the significance of creed in theory but treats minorities the same way Saruris do in practice. The latter have gone so far as to refer to minority groups as “a poison in the body of the Ummah.”

Many ajam (non-Arab, typically Persian ethnics) migrated to the Gulf even before the establishment of nation-states in the region, and were present to play a role in the development of its political, cultural, and economic contours. There were also other, smaller migrations after the Iranian revolution in 1979. Recent heightened interest in the ajam of the Gulf stems largely from present-day Iranian attempts to instrumentalize these elements within Gulf society to serve Iranian expansionist goals. “The Ajam of the Gulf: Demography and Legislation to Protect from Discrimination,” covering Bahrain, Kuwair, Qatar, the UAE, and Oman, comes to us from Moroccan researcher Abdulsamad Balhaj. He explores the degree of religious and social homogeneity among ajam, and questions whether they can be viewed together to begin with. He then discusses Iranian attempts to develop relations with some ajam in order to serve as a wedge against Gulf establishments. His conclusion is that Iran has failed to do so, as these ajam tend to be well integrated into Gulf society and manifest a sense of loyalty and patriotism to their respective countries.

“Sectarianism and its Social Consequences,” by Moroccan researcher Lakzini explores the pressing issue of sectarianism  in the Arab region, and the threat it poses to national unity and regional security. He examines both innate sectarian tensions on the local level and regional efforts to exploit them. He then goes on to consider the potential means by which to overcome the problem, such as promoting a trans-sectarian ethos based on instilling the rule of law and building institutions of civil society. To be sure, sectarianism is a complex matter, and one study cannot cover its many dimensions — but Professor Lakzini has given us food for thought in this critical matter.

This month’s book review, by Palestinian researcher Muhammad Abu ‘l-Rabb, covers Universal Practices in Religious Education (Tajarib Kawniya fi Tadris al-Adyan), a new collection of papers edited by Mohamed Al-Haddad. The book examines  differing approaches to  religious instruction in European and Arab schools and universities. It draws a connection between evolving styles of teaching religion on the one hand and changes in the role of religion in the public space on the other.  The book also discusses differing views on the values of pluralism and openness to the other, and pays special attention to religious instruction in countries with a state policy of secularism.

The Center would like to extend its gratitude to all the contributors who made this book possible, particularly Muhammad Al-Awawdeh, who coordinated and oversaw its production.