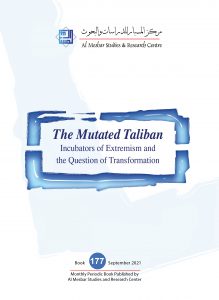 In its 177th book, released September 2021 and titled The Mutated Taliban: Incubators of Extremism and the Question of Transformation, the Al-Mesbar Studies and Research Center addresses the implications of  the Taliban’s rise to power in Afghanistan following the US withdrawal. It examines the extent of the country’s “transformation” through investigating the workings of Islamization, the Taliban’s attitude towards women, and its symbiotic relationship with other extremist groups. It also offers a preliminary analysis of the impact on the post-Taliban reorientation of Afghanistan’s relations with neighboring countries.

On the eve of Taliban’s return to power, the researchers observed a frenetic surge in activity within radical circles. Islamist currents competed with each other to claim credit for the American withdrawal, using jihadist terminology to label the development it as a form of Islamic “conquest” and “victory”. The Muslim Brotherhood and Al-Qaeda, as well as virtually the entire Islamist spectrum, congratulated the Taliban. Islamist media undertook a serious attempt to portray the movement as a “rebel force” and a national liberation movement motivated by animus against the American occupier.  Dovetailing with this narrative was the idea that Taliban is solely a resistance movement that relies on traditional fundamentalism. Lastly, the book undertakes a close reading of the “Islamization” discourse and calls on observers to take the vision and actions of the “new Taliban” seriously before forming a final judgment.

To that end, this book-length treatment of the Taliban will explore the following areas: the emergence of Taliban movement, the rise and impact of political Islam on its “combat ethos”, its attitudes towards women, relations with ideologically adjascent terrorist organizations, whether al-Qaeda or ISIS, as well as with neighboring countries. A number of questions arise organically from this exploration. Will Afghanistan become a haven for separatist movements, especially those directed against China? What impact does the portrayal of Taliban’s return to power in Islamist media have on distant extremist groups such as Boko Haram, especially given the shared structural-tribal character of the two movements?

The book begins with an intellectual approach. It seeks to examine the impact of al-Hakimmiyyah (the concept of God’s sovereign rule) on Taliban governance, along with other ideas promulgated by Abu al-Ala al-Mawdudi and Sayyid Qutb. Particular focus is given to the mechanism of “atonement” of a society resistant to these movements. This point was lent added salience by the rhetoric of Abdul Hanan al-Haqqani this past August.  In describing the residents of the province of Panjshir, resistant to Taliban encroachment, he said: “They are called Muslims, but Islam is not embedded in them. A people does not become Muslim by words or by prayers only.”  The study claims that the “atonement” demanded of the Panjshir people mimicked the ISIS approach of the so-called “atonement of communities”, which in turn was directly inspired by Sayyid Qutb. The study narrated the influence of Mawdudi and Sayyid Qutb on Taliban leaders, explaining how their ideas permeated the group and its structure.  It notes different ideological gradations within the Taliban ranks and concludes that the Taliban’s initial indoctrination framework eroded over time, increasingly supplanted by a worldview imported with Al-Qaeda fighters inspired by Abdullah Azzam and his school.

Apologists for the Taliban believe that the strictures imposed by the movement on Afghan women hail from a specific cultural environment, not ideological extremism. This contention sits uncomfortably with the historical realities, helpfully cataloged in one study, which chronicled the long history of Afghan women ascending to senior positions in ministries and embassies, notable in comparison to the marginalization of previous eras.  This much emerges clearly in the history of the Afghan women’s struggle, starting from the era of Prince Habibullah Khan (1901-1919), Shah Amanullah Khan (1919-1929) and King Zahir Shah (1933-1973). The study places the arbitrary measures taken by the Islamists towards Afghan women from 1989 to 2001 in context, noting how it effectively reversed the feminist gains of the prior decades and, far from being an authentic expression of Afghan traditionalism, represents a historical outlier.

Other studies similarly chronicle Afghan history in order to contextualize the country’s transformation of Afghanistan into a haven and incubator for extremism. They recall the context when the movement emerged, focusing on historical, political, social and tribal angles. Further attention is paid to the establishment of the Afghan Republic during the two terms of President Hamid Karzai, as well as the final days of the Republic last year. This historical review challenges the reader to ponder a question of intrinsic salience: what has changed in the last twenty years that would prevent Afghanistan from reverting into a haven for Al-Qaeda-like groups again?  One study notes that the effects of the competition among international powers will last; it concludes that the emergence of Taliban in the first place was attributable to the withdrawal of the Soviet Union. Its resurgence today is similarly attributable to the American withdrawal. In the author’s assessment, the circumstances which gave rise to al-Qaeda at that time hardly differ from those obtaining today. The study also reviews the use of terrorism against Russia in the 1990s and against China today, noting the evolving state ecurity systems in both countries and their implications for future insurgent movements.

Another study evaluates the internal changes in Afghanistan after the American withdrawal. It applies particular focus to the Taliban’s relations with regional powers and known terrorist networks, taking into account the ideological, religious, and political justifications proffered by the movement. Analysts assess the movement has partially transformed into a more pragmatic and capable diplomatic and military actor, but note its reluctance to use the terms “state” and “republic” indicate a degree of ideological ossification.  Of special note were the interrelationships and mutual influence between the Afghan Taliban and the Pakistani Taliban. It discusses cooperation with global extremist organizations and their position on problematic issues, especially Shiite minorities, of notable strategic relevance.

How will the Taliban cope with the extremist and terrorist movements in the region?  One study tackles just this question by evaluating the competition between Al-Qaeda and ISIS in Afghanistan. It also explores the possibility that havens could emerge for other radical organizations and seeks to outline the most likely scenarios in this realm.

Several geopolitics experts analyzing the American withdrawal have concluded that the United States is attempting an alternative strategy aimed at exerting pressure on China. This view is premised on the assessment that the United States would not guard the frontiers of China and Russia and would depart the region to let them cope with its complex landscape of separatists and rebels.  From this perspective, the study seeks to analyze the risks arising from separatist conflicts or nationalist rebellions, as well as the relations between the Taliban and armed Uyghur groups. They recall Chinese concerns — past and present — about the Uyghur rebel movement, especially as Afghanistan hosts a considerable number of Uyghur refugees. Previous experience in dealing with these groups offers us a glimpse on the threat they may pose to Chinese security. How does this affect Uyghur relations with the Afghan Taliban movement?  The study does not overlook the Taliban’s reassurance to the Chinese authorities not to allow Uyghur fighters seeking independence from Beijing to use Afghan territories as a military base.  On the other hand, it does not answer one vital question: How long will the Taliban’s pledge last?

The Islamist movements happily received the news of the Taliban’s return and the withdrawal of the United States, especially the linkage between this withdrawal and the withdrawal from Somalia, which affected the security of the Horn of Africa. This raises the spectre of withdrawal from other tense areas that would potentially give an opportunity to terrorist groups, repeating the scenario of the vacuum filled by ISIS in 2013 and the Taliban today.  However there is another view, informed by the importance of tribal dynamics to organizational formation. Namely, the Taliban is dominated by Pashtuns while Boko Haram is mostly comprised of the al-Kanuri. This may explain why Boko Haram draws greater inspiration from the Taliban than any other movement, despite the extensive geographical distance separating them.

The book also includes a close reading of the memoirs of Taliban leader Abdul Salam Zaeef. It discusses his biography, the movement’s history, its ideological lineage, his diplomatic positions, and the tactical attitudes of his media statements.

In conclusion, Al-Mesbar Center would like to thank all those who participated in the development of this book, with special thanks to the proficient researcher Abdulah Bin Bijad Al Otaibi, who proposed the project in its three parts. Thanks are also due to our colleague Munir Adib who coordinated this issue, as well as the book’s supervisors: Rita Faraj and Ibrahim Amin Nimr. We hope that you will profit from their labors and teamwork.