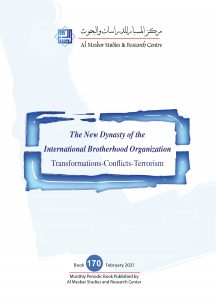 The Al-Mesbar Studies and Research Center in its book “The New Dynasty of the International Brotherhood Organization: Transformations-Conflicts-Terrorism” (Book 170, February 2021) provides a close analysis of the new developments and trends within the Brotherhood’s international organization, and the ongoing attempts made by the group’s affiliates to adapt to a new reality and invest in an alternative future. It focuses on the organizational changes following the shock of June 30, 2013, and their effects on the international Brotherhood as well as its various regional and global branches, to say nothing of its relations with allied governments.

The book begins with a detailed testimony offered by a former leader of the group. He details the organization’s roots and beginnings, starting with Hassan Al-Banna and Saeed Ramadan, and their formation of cadres who could serve as agents of “major” countries. These cadres were trained to exploit political and regional crises to spread their influence, with a particular emphasis on permeating national borders through a stress on Islamic internationalism, whenever the narrow organizational interest required it.

Set against this testimony are the views of other observers and analysts who deny the very existence of the international organization, referring to an organizational bylaw that it described as “barbarous”. In their telling, the central pillar of the Brotherhood’s belief structure was that state and society both, an extreme outlook that ultimately found its logical expression in the emergence of organizations such as al-Qaeda and the Islamic State of Iraq and Syria (ISIS) otherwise known as Da’esh.

Islamist currents exploit the fluidity of the basic idea of ​​the group, and seek to mold it to the challenges they face in every country in which they operate. As a result, organizational responses to national crises take on several broad patterns, each of which give both affiliates and the main international organization a certain freedom of maneuver. Nevertheless, the spectre of violence is never particularly distant.  The Sudanese branch took the initiative to carry out a coup when it turned on the democratic process in 1989, months before the elections. It subsequently implemented a rough division in 1999 by splitting into two movements, each of which maintained a relationship with the international organization, before reuniting in large measure following the downfall of the Bashir regime in 2019. Likewise, the book touches upon the response of the Jordanian and Tunisian branches of the Brotherhood, as well as their style of crisis management. The upshot of these various case studies is to demonstrate the differences between the Brotherhood’s various affiliates are, at their core, a matter of style, not substance.

Multiple studies, books, and periodicals have addressed the subject of the Egyptian Brotherhood’s relationship with the Erdogan government in Turkey, giving rise to a multitude of different hypotheses. This book adds a further hypothesis which seeks to answer the question: Have Turkish elements co-opted the Brotherhood and converted it into a Turkish asset, root and stem? The study seeks to highlight the roots of this cooptation, which it places even before the 2010 protests. Indeed, this development can be traced to the Brotherhood’s gradual shift of organizational operations to Turkey. Many indications have surfaced in the intervening years hinting at a hidden conflict between elements in thrall to Erdoganism, and largely content to play an instrumental role in Ankara’s foreign policy, and still others seeking to reverse recent regional trends and restore the influence of an independent Brotherhood. This conflict has been waged beneath the surface precisely at a time when the Brotherhood is vying for a role within the new Egyptian political system, one not altogether dissimilar to its role in the regime of former President Hosni Mubarak. This study examines the indications of this conflict and possible future development at length, as well as the tensions they reflect between the international Brotherhood and its regional affiliates..

Another area of research touches upon the growing emergence of the Rashad movement in Algeria. Directed against former President Abdelaziz Bouteflika, which sought to have monitored it from its inception, Rashad sought with mixed success to co-opt the budding protest movement. Eventually escalating tensions drove Rashad to turn towards violence against the state, and its rhetoric became increasingly belligerent. Rashad’s advocates deny that it is a political party, but one study assesses that it in fact represents one of the “narrow brotherhoods”, within the movement’s international pantheon, suitably adapted to survive in the Algerian context. The Brotherhood’s international leadership is believed to prize its foothold in Algeria, for a variety of geostrategic reasons discussed in the study.

The international Brotherhood views the African coast along the Red Sea with a similarly keen interest. And so the next study traces its most prominent clusters of activity along the coastal basin, beginning with the visit of Abdel Hakim Abdeen to Djibouti, and extending to the Brotherhood’s nascent activities in Eritrea and Somalia. These last intensified in the wake of Omar al-Bashir’s downfall in Sudan, and a newly permissive security environment which Islamist parties are seeking to capitalize upon.

The international organization feeds on intellectual diversity that masks an underlying homogeneity of purpose. While a desire for change burned hot in various Arab and Islamic nations, thus providing fertile soil for Brotherhood activism, the level of interest in Islamist theorizing varied widely.  This left an opening for determined State actors to dismantle the Brotherhood even in some of its strongholds. This, famously, took place in Qatar in 1999 when the Qatari chapter, under the leadership of Jassim Sultan, actually opted to dissolve itself. The study of Jassim Sultan’s proposals provides a model for how the Brotherhood may bend in the wind, subjecting its own ideas to criticism and scrutiny.

Such structural transformations – behind which the international organization remains hidden – have touched many countries, but remaining within the Brotherhood’s European centers was highly sought after by its youth cadres. They elevated activism there from what had been the movement’s margins, making opportune use of the openings in Western democracies to propose radical solutions to the problems of integration among local Muslim communities. The book notes the introduction of Western strategic interests within the framework of the alignment between the group and some regimes, which allows for the Western recycling of Islamism.

Charitable work, offshore companies, as well as niche sectors such as “halal trade” and “Islamic banking” and other businesses controlled by the group form vital bases of support and remain a major tributary for financing the international organization. Such sources of revenue are crucial to the Brotherhood, which takes advantage of its presence in a number of Latin American countries to further entrench these activities. In addition to these centers of activity, there is another source of Brotherhood financial independence worthy of study, one linked to the black market. Perhaps counterintuitively, close analysis of the Brotherhood’s black market footprint has linked it to the Lebanese Hezbollah and a number of predominantly Iranian-aligned organizations.

Historical analysis highlights that the Brotherhood has always behaved with a degree of pragmatism, sometimes ironically referred to as the group’s “prudent piety”. The transformations that allow it to hide and keep pace with shifting political conditions have succeeded for decades in establishing defensible narratives that justify its behavior and a political discourse that seeks to address different audiences with mutually incompatible styles. While this can seem to contradict the ideological framework established by its founding theorists and developed by its leading intellectuals, it has been necessary in order to lend legitimacy to a pragmatism largely imposed by political circumstances.

In conclusion, the Al-Mesbar Studies and Research Center thanks all the researchers participating in the book, especially our colleague Maher Farghaly, who coordinated its production.