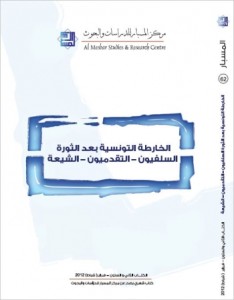 In its 62nd monthly book, Al-Mesbar Studies and Research Center explores Tunisia’s Islamic, Salafi, Sufi, and liberal movements, among others, and presents several points of view about the state’s future under the potential control of such groups. Ali Bin Mubarak looks at the role of liberal Islamists after the revolution in creating a rational and liberal Islamic state interested in human rights and modernity. Salah El-Din Al-Gourshi looks at the plans of the Al-Tahrir Party and the Salafi Party after the revolution. Salah El-Din Al-Amri examines sectarianism in Tunisia and the Shia presence in Maghreb countries since the era of the Alawites. Monzer Bildiafy discusses the next political scene in Tunisia and the ability of the Renaissance movement to transform into a civil political party that believes in authority devolution. He also examines the commonalities and differences among religion, policy, and civilization—“the sacred and impure”—in viewing the Tunisian Islamic movement represented by the Renaissance movement and how it benefits from ruling “in the name of Islam.” Mahdi Abd Al-Jawad studies Salafists in Tunisia after the January 14 revolution. The monthly book is Military State Falls in Tunisia by Fahd Al-Shoqairan. The edition’s study is by Ahmad Abd Al-Hafiz Fawaz and it includes some questions about the Islamist movement’s existence in Tatarstan and Abkhazia and how Islam was spread there.