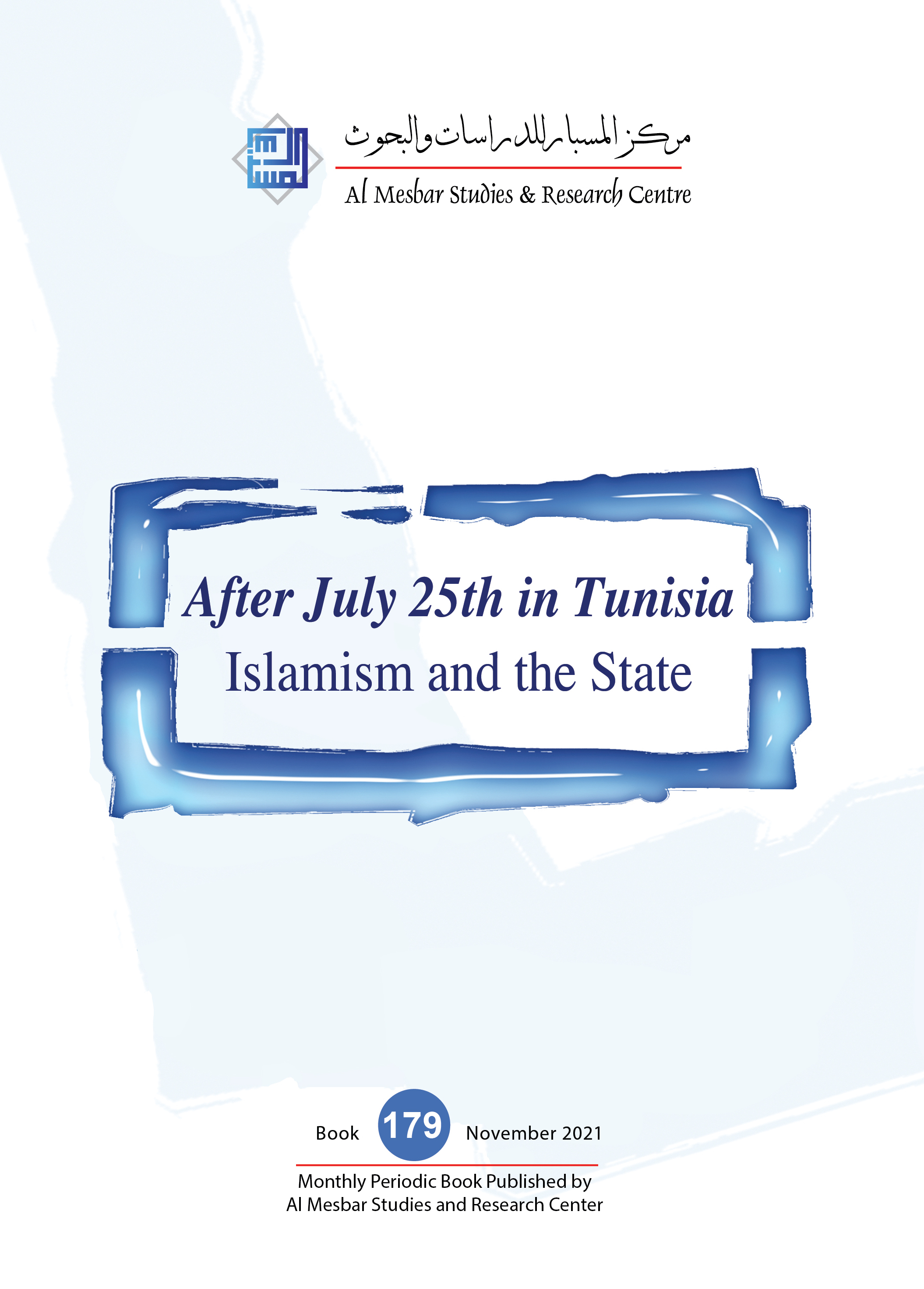 In its 179th book, released in November 2021 and titled After July 25th in Tunisia: Islamism and the State, the Al-Mesbar Center for Studies and Research addresses the record of governance in Tunisia from 2011 to mid-2021. This account concludes with the now-famous events of July 25th, when President Kais Saied dissolved the Tunisian Parliament that had sought to limit the influence of the “Tunisian Brotherhood” for a decade, in the wake of demonstrations demanding the government’s resignation and Parliament’s dissolution. These measures hamstrung Ennahda, raising questions about its future amid rising factionalism among its member base.  Similar questions emerged in the wake of the Muslim Brotherhood’s fall in Egypt amid popular demonstrations against it. Indeed, after similar experiences in Egypt and Sudan, does the collapse of most of Ennahda’s pillars of support in Tunisia herald the end of the line for political Islam, at least as far as sovereign rule is concerned? Have the Islamists proved decisively that they are incapable of running the state?

The book was composed by researchers, academics, and thinkers specializing in both Tunisian affairs and Islamist movements. Substantial attention is paid to President Saied’s decisions regarding Ennahda and their likely repercussions. In addition, several authors adopt an historical approach, seeking to understand the roots of Tunisian Islamism, as well as the ideological schizophrenia between elements drawn towards populist outreach (known in Islamist circles as “da’wa”) and political activism on the one hand, and others which favored isolation from society and exhibited hostility toward modernization initiatives on the other. Others adopt a more critical approach, highlighting the risks posed by the “Tunisian Brotherhood” in seeking to establish domination over society and impose retrograde social modes of behavior deemed threatening by both state and society.

2011 constituted a pivotal year for the Islamist movement in Tunisia. After the fall of the Zine El Abidine Ben Ali regime (1987-2011), Tunisian Islamists were able to gain power, and in so doing offer the Brotherhood’s project its first true opportunity to gain a foothold in government and build external channels of funding.  Not long thereafter, they entered into bitter conflicts with the other Tunisian political opposition parties. They were accused of supporting terrorist organizations and individuals who participated in the civil wars in Syria and Libya. The movement worked to separate its political activities from Da’wa, shifting its rhetoric in 2016 in an attempt to brand itself as the beginning of the first “secular” Islamist movement.

In order to gain a deeper understanding of the events of July 25th, which had their strongest impact on Ennahda, it was necessary to examine a number of other related political events with contextual bearing. The book presents all these holistically, focusing on the mass resignations from Ennahda’s ranks as well as the complaints of the “brothers” about the leader’s tight control over the decision-making process.

On September 25, 2021, 113 prominent Ennahda officials resigned, with another 18 members joining them the following day, bringing the total number of resignations to 131. One study explores the ramifications of such public schisms on the movement’s project and concludes that they reflect deep structural problems in the Islamist approach to governance: first, the rigidity of its social base, and second, the plasticity of key concepts within the Brotherhood’s political philosophy — terms like Jahiliya (pre-islamic era of Arab History), Hakimiya (God’s sovereignty), and others. These term have been frequently used by the movement in diverse and often irreconcilable ways —  itself an impediment to building a durable governing coalition.

The period 2011-2021, during which Ennahda enjoyed its highest degree of power within Tunisian society and state, saw various stages. As Ennahda did not maintain a consistent degree of influence over the course of its ten years in power, one study in the book divides the period into two phases, marked by the differing objectives and methods the party brought to bear. The first stage (2011-2013) was dubbed by some of the party’s stalwarts as one of “strong penetration,” in that Ennahda swept the first post-revolution elections, winning a plurality of seats in the Constitutional Assembly and laying the constitutional foundations for a new state. The second stage (2014-2021) consisted largely of a counter-reaction, as the movement’s empowerment drove a backlash at both the elite and popular levels and substantial numbers of their opponents united in unprecedented fashion in a bid to block the Islamist party’s consolidation of power. This was no doubt partially inspired by the fall of the Brotherhood in Egypt and a marked turn in the region against the Islamist wave of the preceding years.

One study touches on the future of Ennahda following President Saied’s edicts regarding the fate of its leader, who was accused of managing the party in an authoritarian manner. Another study examines a further debate that typically arises following the collapse of an Islamist attempt at governance: has the much heralded “post-Islamist” era finally arrived? In one analyst’s view, elaborated in the book, Islamists are unlikely “to occupy the center [but will] remain in the margins, as is the case with all violent and closed movements in democratic societies.” The history of the Muslim Brotherhood movement shows that they possess a high degree of organizational resilience. No doubt, they will attempt to reform and rebuild for future elections. In this respect, it would be premature to speak of a “post-Islamist” period, or the end of political Islam, as some have contended.

In conclusion, Al-Mesbar Center would like to thank all the researchers who participated in the book, especially Tunisian intellectual and  editorial board member Mohamed El-Haddad and his partner, Ahmed Nazif, who coordinated the production. We hope that the fruits of their efforts and teamwork will find favor in your eyes.