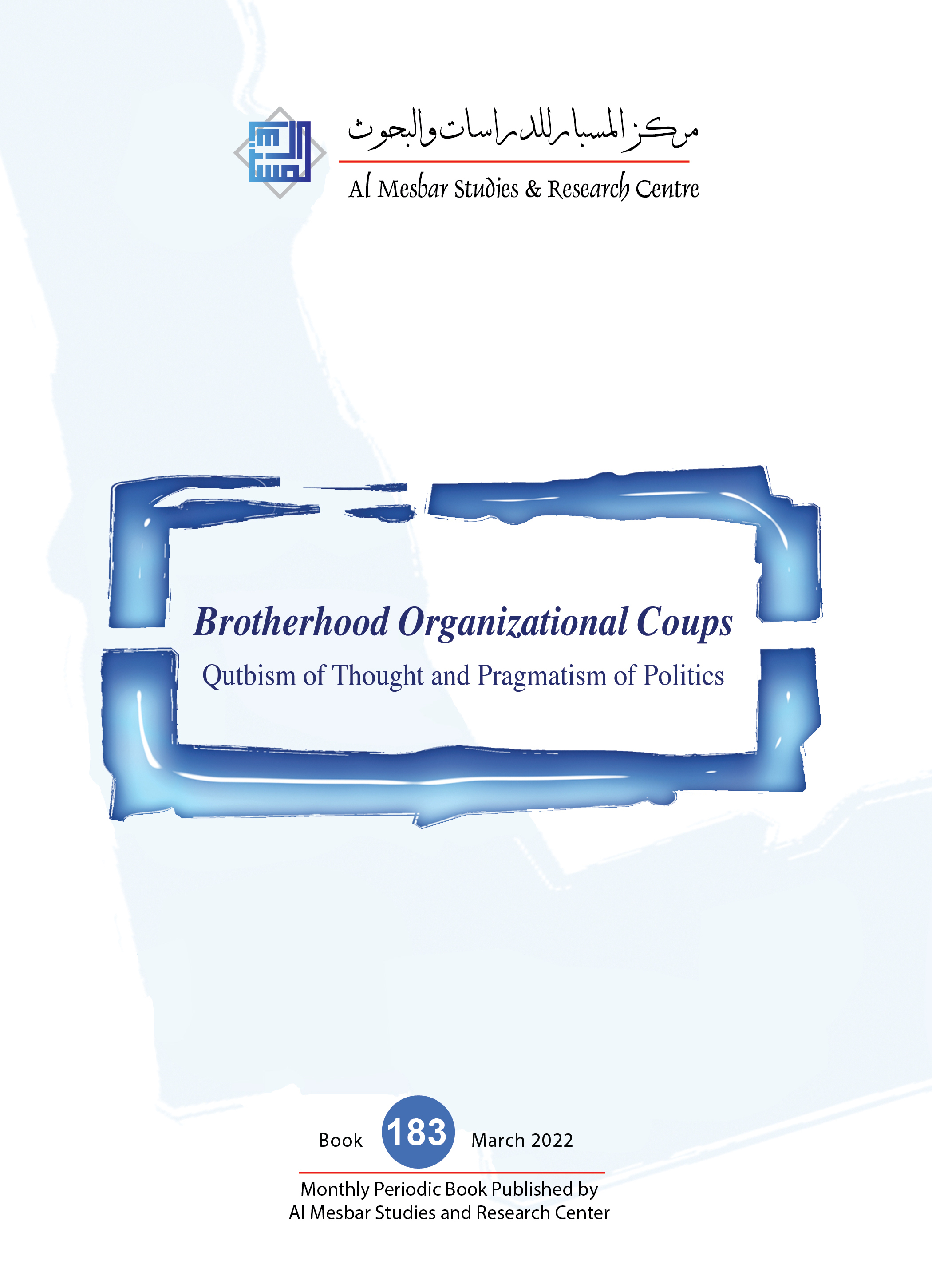 In its 183rd monthly book, released in March 2022 and titled Brotherhood Organizational Coups: Qutbism of Thought and Pragmatism of Politics, the Al-Mesbar Studies and Research Center brings into focus the divisions within the Muslim Brotherhood that have emerged in the last two years as well as the factional leadership struggles that began to afflict the group in 2014. The book evaluates these developments, examines the factors driving them, and how they bear upon the Brotherhood’s diaspora. It concludes by noting the continued dominance of the Qutbist tendency over its two principal rivals within the Brotherhood organization.

Crises define and dominate the various studies of this book. It traces both their history within the Brotherhood and how they have led to schisms and departure from the movement over time. One study offers a definition of terms, beginning with those connected to the current crisis, be it the “2009 Regulation,” the General Secretariat that was abolished in 2021, the Higher Administrative Committee legalized by Mahmoud Ezzat, the Association formed in Turkey, as an alternative to the Guidance Office, or the Group’s Management Committee since August 2021 affiliated with Ibrahim Mounir. The study documents the crisis within the Supreme Committee of Muhammad Kamal in 2015, when the Iraqi Brotherhood leader, Muhammad Ahmed Al-Rashed, was called upon to arbitrate between the two contending factions. Al-Rashed ultimately sided with Mahmoud Ezzat, claiming that “the truth is with [him],” and that all the Muslim Brotherhood are obligated to obey Ezzat and swear him allegiance. This testifies to the deep ossification of the Brotherhood’s thinking on issues of allegiance and the rejection of the primacy of national loyalties. The so-called “Kamal crisis” was not resolved until his death amid mutual recriminations by the Brotherhood members, with some claiming that he was “liquidated by the organization.”

Another  study examines the crisis of Mahmoud Hussein, which began in September 2021 with the arrest of Mahmoud Ezzat and Ibrahim Mounir assuming the position of Acting Guide of the Muslim Brotherhood. Mounir had sensed that the Secretary General, Mahmoud Hussein, was manipulating him. Therefore, Mounir abolished the General Secretariat and formed a committee to manage the organization instead. Mounir even dissolved the Turkey-based Administrative Office for the Organization’s Affairs in July 2021, exposing issues of corruption and a series of financial and administrative irregularities that implicated Mahmoud Hussein and his group. Mounir then formed a Management Committee in Turkey and the two factions held elections which ended in defeat for Hussein’s party. Mahmoud Hussein’s coterie responded by announcing that Mounir had been relieved of his post and refused to hand over the group’s official website, “Ikhwan Online.”

This dispute dealt a major blow to the image of a professional and well-structured organization, even as trust in the Brotherhood’s leadership had undergone substantial erosion. The allegations of the Brotherhood had dissipated and the illusion of impartiality was shattered and the corruption had been exposed.

It is a truism that, in the history of extremist movements, it is difficult for one faction to assert dominance over its opponents without engaging in some form of ideological one-upmanship. This Qutbist tendency was no different, imposing itself on several rival factions, especially as the movement’s experiment in “strategic patience”, when it elected to operate more covertly, came to an end. It was in such a context that violent offshoots such as the HASM Movement, the Al-Thawra Brigade, and others emerged.

This diffusion and rivalry inevitably led to escalating disputes within the Brotherhood’s camp. Indeed, at this juncture the Brotherhood was represented by two different spokespersons and two rival websites. And yet, the strain of violent takfiri sentiment regarding the relationship between society and the state remained a constant.

In one essay, Maher Farghali points out that the head of the Brotherhood himself had redefined pacifism as “anything short of killing.” The group published a book titled The Jurisprudence of Popular Resistance, now considered a touchstone for the group’s views on violence. In it, the authors shun decades of Brotherhood emphasis on peaceful da’wa and fully embrace the logic of violent revolution and animosity towards State institutions. In 2021, this logic led to plans being laid for the establishment of an armed base outside Egypt, with the aim of conducting military operations within the country, according to a leader of the Brotherhood’s armed wing.

In another essay, Muhammad al-Bashari traces successive Brotherhood divisions in Jordan, Algeria, Libya, Tunisia, and Sudan. Al-Bashari’s study presents the impact of divisions within the mother movement over the past three years, as well as on their impact on foreign branches in the Arab world and Europe. The study predicts that the center’s fragility and the fragmentation of satellite branches will likely lead to the strengthening of extremist currents.

One essay, leaning heavily on testimony from within the Brotherhood, examines the new educational curricula adopted in the group. In particular, it draws attention to the recruitment process, and the industry of member formation, as new recruits are systematically molded into ideal members of the Brotherhood. This process typically focuses on recruits 10-21 years old, inundating the recruit with group activities and weekly educational sessions. Recruiters are keen to isolate new members from society through a high wall of activism, so that their new environment can shape their personality. The study identifies the educational curricula that are taught and the principles that are inculcated. The study also traces the different stages of the Brotherhood’s mobilization, comparing the educational curricula that existed before the group came to power in 2013 with the curricula that existed in the 1950s-1970s. The latter relied on the interpretations of Sayyid Qutb for key Qur’anic Surahs, in addition to the translated works of Pakistani Islamist theoreticiian Abul A’la al-Mawdoudi.

At the dawn of the 21st century, the books most in use in Brotherhood circles were Principles of Islam (for the lover-member level), Rhab al-Islam (for the supporter-level), and Nur al-Islam (for the committed pledgee-member). Following the Brotherhood’s fall in June 2013, the group amended its educational manuals. One researcher claims to have obtained a sample of the monthly curriculum. Upon close analysis, the researcher discovered that it includes several paragraphs drawn from the interpretation of Surat al-Qalam, itself inspired by the arguments advanced in Sayyid Qutb’s In the Shadow of the Qur’an. In these writings, the researcher observes a glorification of the literature which emerged from prison and similar ordeals. The study focuses on the mechanisms of military education for individuals, which grew increasingly central after the group’s fall from power.

Another area addressed by the book is the Brotherhood’s media and its impact on internal schisms in the period 2013-2021. It studies the tools and platforms characterizing this media as well as the recurring transformations in its discourse about defining the “self” and the “other”. It traces the several stages this media has gone through in terms of “restructuring” aimed at facilitating its work abroad and facilitating the Brotherhood’s regional alliances. The Brotherhood’s media equitis have also proven tremendously important  in mobilizing and transferring financial resources outside Egypt, which enables the organization to sustain its campaign against the Egyptian government and continue to recruit the next generation of activists.

The Muslim Brotherhood, prior to the 2013 revolution, was known for speaking in two tongues. One of them is oriented toward the West, speaking in the discourse of human rights and palatable to the international community. At one point, the researcher quips that the group has seemingly adopted a strategy whereby “one hand kills and the other hand denounces the violence”. This study goes into great detail concerning the particular form of psychological warfare practiced by the Brotherhood, also noting that the group has recently been thrown into crisis by the need for auxiliary media channels to accommodate the migration of refugees from Turkey.

Another study seeks to analyze the Brotherhood’s use and politicization of human rights issues, inviting foreign powers to insert themselves into areas traditionally understood as falling under the prerogatives of national sovereignty. To that end, the Muslim Brotherhood established temporary human rights organizations reaching out to international human rights organizations and adopting an eclectic discourse which subtly inserted the group’s perception of “political rights” into the discourse of “human rights”.

Another study examines the case of Omar El-Deeb, whose disappearance was announced by the group in Egypt, and who promptly re-appeared in the ranks of ISIS. The researcher elucidates the Brotherhood’s human rights organizations largely instrumental use of such cases, noting that they “did not deviate from their political contexts.” He explains the Brotherhood’s use of human rights discourse to expand the organization’s field of maneuver, as the group developed ad hoc a host of new terminologies, such as “The Third Foundation”, “The Third Way”, “Democratic Islamism” and other terms designed to reconcile the group’s conflicting commitments.

One author, Hussein Al-Qadi, highlights the role of the Al-Azhar mosque in checking the Brotherhood’s expansion. Indeed, the group has been working since its inception to undermine Al-Azhar’s authority among Muslim publics. One study dedicated to the issue deals with the Brotherhood’s attempts to infiltrate Al-Azhar’s inner sanctums, referring to Al-Azhar’s initiative in confronting terrorist ideology at the Al-Azhar International Conference, which was convened for this purpose. However, the researcher notes that the conference ultimately did not refer explicitly to the Brotherhood in its statement, focusing instead on denouncing ISIS. On the other hand, the researcher documents how Al-Azhar drew a linkage between the Brotherhood and ISIS in two separate statements: the first, on August 27, 2017, and the second on February 23, 2019. The essay also focuses on the efforts made by Al-Azhar to contain the Brotherhood’s influence and to raise awareness about the dangers of extremist Islamist discourse. The study had highlights in particular the distinguished efforts of Sheikh Dr. Ali Gomaa, which culminated in the book The Tale of Terror, in which he analyzed the personality of Sayyid Qutb, the path of Qutb’s life, and the intellectual deficiencies in his In the Shadow of the Qur’an.

In conclusion, Al-Mesbar Studies and Research Center thanks the entire team of researchers who participated in this book. Special thanks are dedicated to our colleague Maher Farghali, who coordinated the book’s publication and the fellow Saudi researcher and thinker, Fahad Suleiman Shoqiran, who supervised the issue.