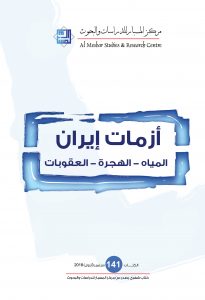 It is widely recognized that Iran has been infiltrating several Arab and African countries, undermining civil institutions and weakening the state by playing the religious and sectarian cards. In doing so, it seeks to obstruction the natural development of these countries and radically transform them through “silent coups” targeting political forces and parties. Iraq, Lebanon, and Yemen are perhaps the best-known victims of this campaign. Iran meanwhile applies other interventionist practices beyond the exploitation of religious and sectarian sentiment. The “Iranian tide” has cast its shadow by spurring political and economic crises and regional setbacks overall.

Most studies on the subject have in one way or another focused on Iran’s foreign policy. By contrast, Al-Mesbar Center’s new book Crisis of Iran: War, Migration, Sanctions adopts a more multi-pronged approach: It considers both Iran’s internal crises and external challenges, exploring what each brings to bear on Tehran’s expansionist ambitions. It also examines the impact of U.S.-led economic sanctions reimposed in November 2018, following Washington’s departure from the Iranian nuclear deal. The book’s diverse studies include treatments of internal social fissures, the water crisis, demographic shifts, the eruption of protests in late 2017, miserable prison conditions violating basic human rights, and the high cost to Iranians of the government’s foreign entanglements.

The regime itself bears partial responsibility for the national water crisis: While natural and topographical factors have played their role, political corruption and resource mismanagement have worsened the situation. The crisis has also been exacerbated by demographic growth and mass migration. As the book demonstrates, moreover, Iran’s provinces have been the worst hit by the crisis, contributing to forms of social unrest that pose a security problem in and of themselves. Witness popular protests in 2016 and 2017, some of which amounted to a direct challenge to the regime.

Iran’s demographic changes in recent decades have proved momentous. For example, mass rural migration to the capital Tehran have had a clear impact on the country’s political transformation, over decades past and to the present. Whereas the “green movement” protests of 2009 were primarily led by the middle class located in the north of Tehran, more recent demonstrations have seen a surge in participation by the underclass. The book contains a comparative study between the 2009 protests and the uprising of 2017. It parses the differing as well as overlapping slogans of the crowds, and analyzes the roots of the unrest in both cases. A separate study focuses on the more recent protests from the vantage point of Iran’s Ahwazi Arabs.

Continuing state violations of its citizens’ human rights — in particular, countless executions — have redounded on the Iranian leadership in the form of popular outrage. Iran registers the highest number of executions per capita in the Middle East — an outgrowth of the 1979 Islamic Penal Code, which, despite 2013 amendments, faces strong objections from international and domestic legal activists, civil society organizations, and human rights groups. Among the most egregious of these executions has been the killing of juveniles and minors. In January 2018, for example, authorities executed three juveniles upon their reaching “legal age.”

A further study in the book, examining prison conditions in Iran, includes an analysis of the Iranian penal code and its uneven application with respect to women and minorities.

Since 2011, acting on its regional ambitions, Iran has treated Syria as its own “backyard.” Its behavior was not a child of yesterday, however: It rather stems from a range of geopolitical calculations, historical experiences, and reciprocal functional correlations between the two regimes. The book strives to develop a theory about these correlations which may contribute to the understanding of Iran’s present behavior — not only in Syria, but also throughout the Fertile Crescent and beyond, including Yemen.

The book also devotes two reports to the role of Iranian soft power as a component of the regime’s foreign policies toward Europe and the United States. These studies examine the organizations and personalities that serve as representatives of Tehran’s interests in some European countries; the role of media; and the “National Iranian American Council.”

Al-Mesbar Center would like to thank all the book’s contributors — in particular, our colleague Ibrahim Amin Nimer, who coordinated the team work.