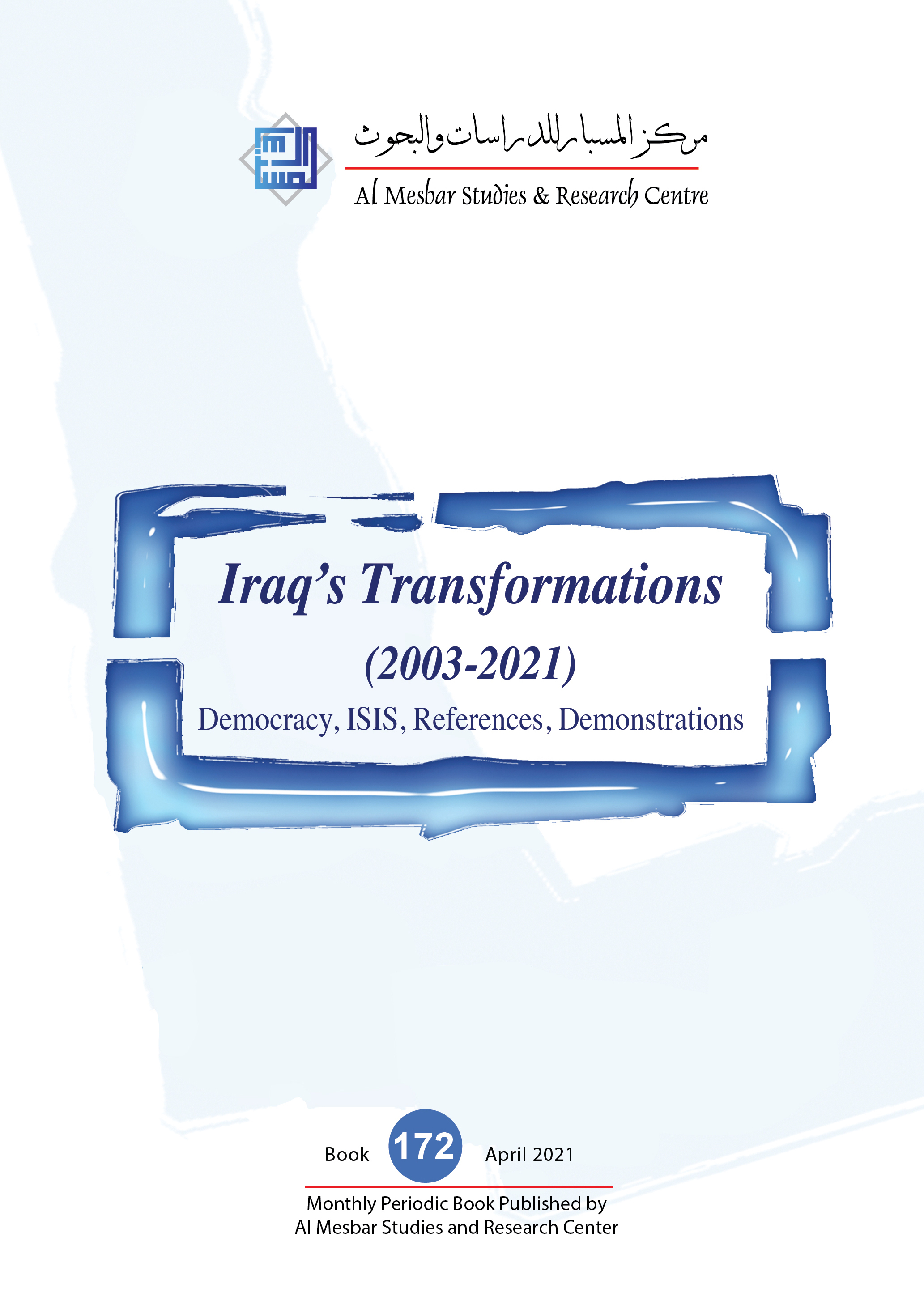 The Al-Mesbar Studies and Research Center’s latest monthly book, Iraq’s Transformations (2003-2021): Democracy, ISIS, References, Demonstrations (Book 172, April 2021), highlights the political and social transformations in Iraq since the fall of Saddam Hussein’s regime in April 2003. It traces critical developments through the formation of interim governments, the establishment of the elected government, and the challenges they face in terms of the rise of ISIS, Iranian influence, and, perhaps most crucially, the ascent of Islamist political parties to power. These latter took hold of the state and its institutions, shaping Iraqis’ collective destiny by means of armed militias and the exploitation of economic and political conditions.

The first study provides an internal testimony about the experience of the Iraqi Governing Council, in which one of its most influential members recounts the circumstances surrounding its formation, membership, working conditions, and relationship with the U.S. administration at the time. It then documents the decisions taken at that delicate stage in the country’s history. In his conclusion, the author sets forth his own reflection on the past and outlook on the future.

As a result of the formation of the Council and successive governments, social change has been simultaneously hindered and accelerated by repeated political transition. Parliamentary elections, rather than producing a new equilibrium, resulted in schisms, endless re-alignments, and discordant social blocs. Iraqi unity began to fray, and a crisis atmosphere became the norm. In parallel, levels of terrorism rose with an almost geometric progression. Paradoxically, declining security contributed to the emergence of protests which Islamist elements then exploited in order to reintroduce themselves. One study finds that this dynamic among Iraqi Islamists, inter alia, paved the way for the emergence of ISIS (the Islamic State of Iraq and Syria, also known as Da’esh) and the paralysis of the Iraqi political class.

The book touches on the political performance of Shiite religious authorities in Najaf, detailing the role they played after 2003 in the political, social, and cultural fields. It raises insightful questions concerning the factors that led to the expansion of its influence, and its manifest effectiveness in shaping the new political landscape in Iraq.

Another study contends that, at the beginning of the search for an alternative government to Saddam Hussein’s regime, the positions of the senior-most ranks of the Shi’ite clerical establishment, colloquially known as the marja’iyyah, may have inadvertently empowered leading Sunni Islamists. However, the researcher notes that the marja’iyyah’s positions have been subject to change, particularly in the last two years. While the study attempts to furnish a sympathetic portrait of the clerics’ forays into the political realm, out of respect for their standing, it does not do so at the cost of historical accuracy or scholarly detachment.

The book offers a guide to the history, origins, and permutations of the Iraqi parties formed during the democratic era. It notes that most of them were associated with neighboring countries, especially the Islamist parties, which capitalized on the fragility of the state and weak security environment to strengthen their influence and undermine non-partisan institutions. In so doing, they employed forms of democratic procedure while mobilizing sectarian passions in a bid to catalyze political and regional realignments.

The enclosed studies also explore Iraq’s culture of electoral rallies, evaluating their impact and potency. Another analysis affirms that the deficiencies and chronic breakdowns of governance in Iraq led to the outbreak of the “October demonstrations” of 2019. The study assesses that these protests testify to widespread popular rejection of the old political process. In particular, a turn in sentiment is detectable from voters weary of how Islamist parties exploited the democratic process to maximize their control of national and subnational institutions, draining representative government of its content.

As any serious study on recent Iraqi politics must do, the book examines the rise of terrorism and also, as any humanist study should, provides an assessment of the potential paths to recovery from this traumatic period. Iraq in its “post-ISIS” condition is a society very much in post-traumatic condition, as ISIS’s conquest of wide swaths of the country left an indelible mark. Having emerged from a period of conflict and extremism, the authors outline roadmaps for the transition to a culture of moderation and disarmament. Crucial to this vision are programs of compensation for victims, and support for their psychological recovery.  Areas freed from ISIS’s rule often bear the signs of collective psychological scarring, and so can benefit from lessons learned in other countries that have suffered similar ordeals.

The book concludes with a literary meditation, written by Iraqi author Zuhair Al-Jazaery, on the rhetoric and symbols of the “October demonstrations.” He documents the history of the most prominent symbols in Iraqi political rhetoric as well as demands raised by the protesters, opening the door to hope in an Iraq that embraces all its citizens.

In conclusion, we would like to thank all the researchers participating in the book, especially our colleagues Samira Ibrahim, this issue’s coordinator, Ibrahim Amin Nimr, who worked on its production, and Rashid Al-Khayoun, the project supervisor and conceptual creator.