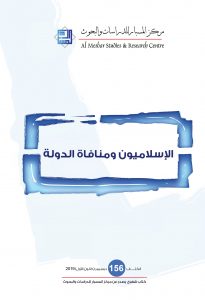 In its 156th monthly book (December 2019),  Islamists and State Ostracism,  the Al-Mesbar Studies and Research Center examines the attitudes of Islam towards the state and its key elements. Furthermore, it analyzes the tainting of Islamist revolutionary ideology, which stems from its rejection of both modern state and society on the one hand, and its repeated attempts to produce a parallel state and society molded in its own image on the other. The studies contained within the book cover movements in Egypt, Sudan, Syria, Jordan, Morocco, Tunisia, Lebanon, and Iran. They seek to investigate the theoretical and practical frameworks governing “Islamic regimes” and their intellectual fluctuations.

Historical models of Islamist rule in a number of Arab and Islamic countries have faced enormous obstacles. Their troubled circumstances have often led to turmoil and conflict both domestically and in neighboring countries. The state soon turned into an extension of the Islamist organization, which in turn aligned with factions abroad. This threatened the stability of the state and undermined the faith of the people in their rulers, as both justice and equality suffered and separatist tendencies grew.

The book presents the experience of the Muslim Brotherhood in Egypt and Jordan in order to understand and explain the elements of the Islamist movements’ work in politics. In both nations, the rejection of “Brotherhood ideology” and its branches can be traced to the problematic roots of that ideology.  The Brotherhood’s experiences in governance were marked by schism, turbulence, and mismanagement. This experience stood in stark contrast to campaign promises about the “complete separation” between the Brotherhood’s preachers and its politicians, and vague and unreconciled strategies of “political piety” alongside claims to adopt a “civil state.”

The system of the Sudanese Islamist model of the “National Islamic Front,” which seized power through a military coup on June 30, 1989, provides a stark example of the Brotherhood’s seizure and neutralization of the official state and its creation of a “parallel state” which coexisted with, and severely undermined, the former. While governing in Khartoum, the Sudanese Islamists sought to preserve their affiliation to an international organization and continue the pursuit of international expansion, as detailed in one of the book’s studies.

The relationship between the state and the Muslim Brotherhood in Syria is one of the most tense and violent relationships between a dynamic organization and a political regime. This relationship went through varying stages of intensity, especially the two major shifts of 1982 and 2011, which produced some of the most dangerous social and regional repercussions the region has seen in decades. In both instances, the Brotherhood worked to incite violence and threaten state institutions — striving to compete with the regime in the political realm, co-opt peaceful protest movements, and subordinate local opposition figures to the dictates of the international organization.

The book discusses the theory of the wilayat al-faqih — or,  “guardianship of the jurist” —  and its implications for the relationship between faith and the idea of the state. As it was applied in Khomeini’s Iran, the doctrine embraced expansionism and the “export of the revolution.” It transcended national borders, adopted slogans which legitimized violence, and incited regional tumult under the pretext of “supporting the downtrodden.” The book also monitors shifts in Shiite political thought, presenting the experience of Hezbollah, which established its own “parallel state” in Lebanon and is still obstructing the path towards the establishment of a fully civil state there.

Meanwhile, in Morocco, organized Islamist activism began in the early 1970s with the establishment of the first Islamist political group. The Moroccan state did not object to granting Islamist organizations legal licenses to operate within a limited and controlled framework. After the “Islamic Youth” group was implicated in violence, however, the Moroccan state adopted a new approach and sought to dismantle these organizations. Subsequently, the gradual integration of part of the Islamist movement into Moroccan political life began. At the same time, the state adopted a different approach with other Islamist groups that did not accept the terms of reintegration into political life.

The Moroccan state elaborated two basic mechanisms for dealing with Islamists. First, a containment mechanism which required the acceptance of two fundamental conditions: the recognition of the authority of the Moroccan king, and working within the framework of the Islam adopted by the Moroccan state and in accord with the constitution and the law. This model took the form of the Unification and Reform movement. The second mechanism was that of ostracism for groups that rejected these conditions. This was the approach applied to the “Justice and Charity” party.

On the other hand, the Ennahda Movement in Tunisia had a markedly different experience than that of several other Islamist movements. Its first generation questioned the legitimacy of the political and religious state and opposed both in the civil, social, educational, cultural and religious spheres. The book seeks to explore the formal transformations in the relationship between the state and the Tunisian Brotherhood on several levels, and the tension inherent in the Brotherhood’s ideological rejection of the modern state with their attempt to integrate within it, and reconcile themselves to the nature of modern governance.

In conclusion,  Al-Mesbar Studies and Researcher Center extends its gratitude to all the researchers who contributed to this book, particularly our colleague Montaser Hamadeh, who coordinated its contents.