Pathways of Tolerance in Islam and Christianity 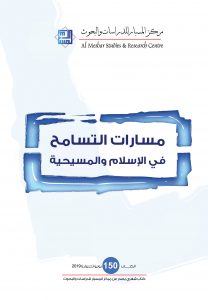 The Al-Mesbar Studies and Research Center in its 150th book, Pathways of Tolerance in Islam and Christianity, published in June 2019, continues to present a historical and intellectual account of interfaith tolerance. In so doing, it adopts Christian-Islamic relations as an example of how to study related historical developments and religious frameworks in this vital field.

The book’s aim is in line with the Tolerance Initiative, launched in the UAE this year in the belief that positive religious dialogue is needed in order to establish a conciliatory sentiment at a time when opportunities for community are narrowing and appreciation for religious pluralism’s value is diminishing.

The historical approach presented here offers a positive but critical reading of biased sources, which focus on understanding religions’ historical context. The essay “Christianity in Islamic sources” notes that the pattern of chronicling carries the aspect of “a history of interaction rather than the history of a religion.” These sources provided the historical perspective of the Islamic-Christian relationship starting from the period of the Qur’an, proceeding through the works of Al-Kharaj and Abu’l Hasan al-Mawardi’s al-Ahkam al-Sultaniyah all the way through Tabarani’s Ma’ajim  and al-Bukhari’s Abwab Wal-Tarajim.

The methods of chronicling differ from what we find in works dealing with financial accounting, as well as the books of joint responses to doctrinal matters, which debated the establishment of religious truths. The study also examines general books of literature and of Christian monks; works dealing with architecture and contemporary events of the realm, as well as Christian poets. In all these, signs of tolerance can be seen in works from both the literary and physical fields. These were followed by sources dealt with Christian doctors and scientists in a similarly positive spirit. The study attempts, without proclaiming a new historical methodology, to offer a new interpretation of coexistence, rechronicling the shared history of the two religions.

The essay titled “Speeches and Policies of Tolerance in Islamic History” is biased towards the Mu’tazilite school, the medieval philosophers, and Sufism in the Islamic realm. It holds the view that tolerant discourse in the Islamic religion is ultimately traceable to this trio. Another essay seeks to highlight how the historical record carried exceptions showing that the roots of coexistence among monotheistic religions are old at the social level. This should lead us to deal cautiously with narratives that speak of the ostracization of the other, either religiously or ethnically. This affords us an opportunity to think of historic tools to revive the values ​​of tolerance as in previous epochs, despite the foreignness of the term to Arab consciousness in general.

One testament to the openness of Islamic civilization can be found in the construction of churches in the Umayyad and Abbasid periods. In order to emphasize the importance of the Church in the social and cultural fabric of the Umayyad Caliphs respected the covenants and agreements between the Muslims and the Christians in conquered countries, preserving the sanctity of the churches. And, once codified, most Caliphs did not dare to alter the status quo they inherited, despite their nominally absolute authority.

The experience of the Islamic civilization in Andalusia seems to be a unique historical experience in the field of coexistence and interfaith encounter, with some exceptions. Therefore, the book ascribes importance to the positive aspects of this encounter, which rose to the level of doctrinal debates promoting mutual understanding between Muslims and Christians. These debates were based on mutual knowledge in terms of language, culture, and religion and were often conducted between Christian priests and Muslim jurists. This type of study guides us to the fact that history is not only rooted in conflicts and wars, but also on the social and cultural fabric that requires we exert maximal effort to extract from the depths of the historical source material.

In order to support the religious participants between Christianity and Islam, the book addressed Jesus in two studies. The first is “The birth of Christ in the Gospels and the Book of Mary: Comparative Study”, which is a witness to the reconciliation of narrative variances that influences our understanding of religious texts. The Qur’anic texts included the birth icons, some of which appeared in Islamic miniatures, reflecting the Qur’anic narrative of the birth of Jesus “the Nazarene”.

The second study concerns the representations of Christ in Sufism as an example of the spiritual education Sufis advocate, and a source of guidance desired by the Apostles and the Seekers, and a source for the love that heals corrupted souls. The essay traces the image of Christ in the Islamic mystical heritage, starting with “The Meccan Revelations” by Ibn Arabi, continuing with “The Conference of the Birds” by the Sufi poet Farid al-Din al-Attar, and concluding with Jalal al-Din al-Rumi’s “Masnavi”.

The book studies the common spaces and religious exchanges between Copts and Christians in Egypt. It focuses the level of religious symbolism, festivals, and traditions, and demonstrates the extent of their mutual identification, which warrants further academic research in the field of religious anthropology.

In conclusion, Al Mesbar Center would like to thank all the researchers involved in the book, especially colleague Rita Faraj, who coordinated the issue with her colleagues, and we hope that the work, and the team’s efforts, will meet your expectations.