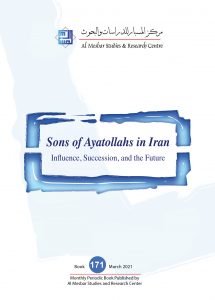 The Al-Mesbar Studies and Research Center’s latest monthly book, Sons of Ayatollahs in Iran: Influence, Succession, and the Future (Book 171, March 2021), deals with the influence of the political clergy in Iran, offering a careful analysis of how senior positions of rank and influence are inherited by the scions of the religio-political hierarchy. It seeks to lay out the genetic superstructure, as it were, of religious and political authority in Khomeinist Iran.

Any study of Iranian politics must begin with the framework of the “Velayat-e Faqih,” or the Guardianship of the Jurisprudent, the ideological rationale for clerical rule first formulated by Ayatollah Khomeini in 1970. Begin, but not end.  And indeed, several studies focus on the mechanics of inherited succession within that framework.  Although ostensibly devoted to rule by the most learned Shi’ite jurists, in practice Khomeinist Iran provided for the political and economic ascension of the sons of Ayatollahs. The book also includes an interview with Hassan Shariatmadari, a leader of the political opposition, who discusses the likely future of the Velayet e-Faqih in a post-Khamene’i Iran.

The book outlines how moderate trends are often suppressed, and more hairline factions promoted, by the informal workings of Iranian government. Inherited succession plays a prominent role in those workings, as illustrated by the repeated capture of key institutions of government and state capabilities by conservative factions.

Some analysts believe that the victory of Democratic presidential candidate Joe Biden in the U.S. presidential elections will soften the edges of the Iranian regime’s behavior, especially vis-a-vis its nuclear program and human rights record. Unfortunately, early indications are not hopeful. Tehran’s core decision-making betrays no signs of correcting course and, despite overtures from Washington, the conservative faction’s inclination toward a hawkish foreign policy remains as strong as ever.

Political and religious inheritance has been one of the pillars on which the Velayat-e Faqih has always been based. A religio-political theory of government first articulated by Ayatollah Khomeini, it aims to bring together all groups of Iranian society under the rule of the Shi’ite jurisprudential elite. One study concludes that “public policymaking in Iran relied on the politicized clergy, in the belief that the religious institution should produce the core personnel for the government’s executive elite. The seminaries of Qom played an influential role in graduating a generation capable of ascending to positions of responsibility in the Khomeini era. Khomeini’s theory of government, which held that only the most learned clerics could be entrusted with rule, had the effect of disenfranchising the bulk of the population, and risking that the clergy would devolve into an array of politicized factions prizing loyalty above competence.

In parallel to its analysis of the influence wielded by Iran’s clerics and their heirs since 1979, the book contends with the role played by “Khomeini’s men” within certain seminaries, in promoting the sons of favored Ayatollahs. It shows where this approach has netted gains for the regime, and where it has fallen short.

Another study observes that economic support for clerical scions abroad often continues even in cases of opposition or deviation from the regime. However, it postulates that this support serves as a tool for establishing pressure groups that while ostensibly opposed to the regime, can in fact burnish its legitimacy by creating a veneer of pluralism. Even more to the point, such well placed figures abroad often play a critical role in circumventing Western financial sanctions.

The book attempts to answer the questions raised concerning the future of the Vilayat-e Faqih in Iran in a post-Khamen’ei era. One likely scenario posits an alliance of the Revolutionary Guards with Khamene’i’s loyalists, which would likely work aggressively to thwart any serious opportunity for liberalizing reform.

The book also includes two studies on U.S.-Iranian relations during the era of former U.S. President Donald Trump and the beginning of the Biden administration. The shift in tone and policy orientation accompanying the transition from the former to the latter had the unintended effect of furnishing Tehran’s hardliners with propaganda victory of sorts, allowing them to claim that their resistance to moderation or concession was ultimately vindicated by Washington’s turn toward detente.

Another study focuses on the Iranian penal system and how it has been impacted by the Covid-19 pandemic. In particular, Iranian prisons became hotbeds of unrest, attempted mass escapes, and chronic protest at the authorities’ maladroit response to the pandemic’s spread among the prisoner population.

Within the framework of internal Iranian cultural dialogue, one study explores the debates between the Iranian thinkers Mohsen Kadior and Abdul Karim Soroush on a variety of topics, including jihad, violence, and coercion from an Islamic perspective. The results are highly revealing in terms of the nuances of opinion and dissension now regnant among Iranian intellectual circles.

Lastly, one study offers a critical review of the 2011 work, The Ideology of Tyranny, The Use of the Neo-Gnostic Myth in American Politics, by Washington University Professor Guido Giacomo Preparata. Preparata contends that the creduluousness with which many in the American political class treat Islamist movements, such as the one governing Iran, ultimately owes a great deal to the influence of postmodern philosophy — specifically, to the French philosopher Michel Foucault, whose infamous excursion to Iran in 1978-79 and endorsement of Khomeini’s challenge to liberal modernity occasionally still find echoes within certain circles of the American academy.

In conclusion, the Al-Mesbar Studies and Research Center thanks all the researchers who participated in the composition of this book, especially our colleague Mohamed Mohsen, who coordinated its production.