The State in Arab and Islamic Theory: Roots and Challenges 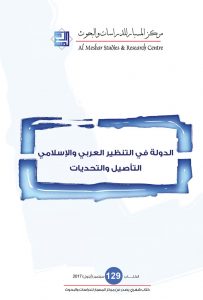 The State in Arab and Islamic Theory: Roots and Challenges” is Al-Mesbar’s 129th monthly book. Its studies focus mainly on the concept of the “state” as articulated in Islamic philosophy and literature, in light of the contemporary context.

Articulations of the political principles arising from Islam have long revolved around the concepts of a “caliphate,” the “Imamate,” and leadership in general. But the “state” — in the sense of a national polity distinct from the ruler himself — has received less attention.

The political map of a state, as expressed through the formative periods of Islam, may be divided into three categories: jurisprudence, the sultan (ruler), and jurisprudential literature. But the idea of the “state” in jurisprudential literature barely transcends the concept of the “bay’a” — the oath of loyalty to caliphal (or other) rule. As to the literature concerned with the “sultan,” it differed little from the minimal jurisprudential interpretation of the “state.” Abu ‘l-Hasan Al-Mawardi, one of the most prominent jurists of the Shafi’i school, was among the first to justify and defend authoritarian rule.

The concept of “Wilayat Al-Faqih” — Guardianship of the Islamic Jurist — may be regarded as the most elaborate expression of a statist political system in Shi’ite Islam. It has been attributed to Ahmed Al-Nuraqi of the period of Qajari rule in Iran. It was later elaborated and modified by Khomeini, who developed it into a religio-political concept of governance following the success of his revolution in 1979. Khomeini established the principle that the rule of the Jurist was insperable from Islam as a “deen” — or comprehensive life system. Imam Mehdi Shamsuddin rejected Khomeini’s philosophy, and suggested an alternative: “Guardianship of the Ummah.”

The book contains seven papers, dealing overall with three “binaries” which have dominated Arab and Islamic ideological discourse: the nationstate vs the ethno-state, the modern state vs the traditional state, and the authoritarian state vs the civic state.

In doing so, it aims to shed light on some of the most urgent threats to Arab states today, together with root factors that threaten its institutions and survival in certain areas.

Muslim Brotherhood founder Hasan Al Banna’s theories of political rule are summed up in a slogan that is essentially totalitarian: “Islam is religion and state, a book (Qur’an) and a sword.” In other words, he established an immutable theological basis for a political concept, turning what was essentially general political jurisprudence into a slightly more detailed discussion of theology.

Three years prior to the establishment of the Muslim Brotherhood (1928), Al Azhar’s Imam Ali Abdul Razzaq published Islam and Foundations of Rule, in which he refuted the concept of a caliphate as a core of Islam. The book garnered heated reactions and much criticism.

The book also attempts to study obstacles to democratic transitions in the Arab world and dilemmas of liberal thought in the region.

The Center wishes to thank all the scholars who contributed to the book, especially our colleague Rita Faraj, who coordinated the chapters.