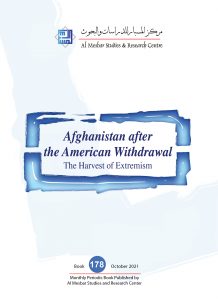 In its 178th book, released October 2021 and titled Afghanistan after the American Withdrawal: The Harvest of Extremism the Al-Mesbar Studies and Research Center examines the American withdrawal from Afghanistan, which swiftly led to the Taliban’s capture of the Afghan capital of Kabul and the remainder of the country. It addresses the questions surrounding the viability of the war on terror, narrating the various attempts to re-assess American strategy in waging it. It reviews optimistic attempts to defend the strategy through an evolving threat perception which de-emphasizes terrorism, as well as more pessimistic assessments which hold that the American strategy has suffered from a series of intellectual failures at the outset, and been weighed down by half-measures and ambiguity in execution, yielding a less stable, more extreme region in its wake.

The book’s first study, “American strategy in Afghanistan” describes its subject as a failure, and diagnoses the war on terrorism as “a mistake attempting to correct another mistake” based on a faulty understanding of international terrorism. It describes the strategy as “lightweight”, where overarching strategy was subject to repeated reversals by successive administrations. The study touches on the successes of the killing of Osama bin Laden and the military and financial siege put in place around “core al-Qaeda” before proceeding to a grimmer strategic reality that the overall number of terrorists and terrorist groups has grown substnatially since 2001.

The second study analyzes the American strategy in confronting the Taliban over the last twenty years in detail. It stresses that the attempt to contain the Taliban emerged following the American surge in 2010 as a concession to the inability to win a decisive victory. It was pursued for several years thereafter in an ultimately fruitless attempt to negotiate a peaceful power-sharing agreement with Taliban leaders. This in turn lay the groundwork for an American withdrawal executed following a pledge from Taliban not to threaten the United States during or after said withdrawal. Needless to say, these negotiations failed to produce any equivalent pledge concerning Afghanistan itself.

The domestic American reaction to the withdrawal was novel in its content yet familiar in its timing, coinciding with the twentieth anniversary of the terrorist attacks of September 11, 2001. One justification for withdrawal centered on the ostensible evolution of the Taliban, which had developed from an extremist group into an insurgency and finally to a national movement that had, or so this school claimed, transcended its earlier extremism and made its peace with the international system.

Alongside such claims were a number of articles authored by specialists in American military campaigns in Afghanistan. These shared two major themes. The first being the claim that the war on terrorism has reached a logical end, and changed geopolitical conditions and strategic prioerities call for a pivot to containing Chinese influence. The second is a straightforward appeal for Americans to “learn to live” with terrorism. In this latter view, terrorism is one of many dangers which must be managed but which do not pose outlier levels of risk to the average citizen. Proponents of this notion analogize terrorism to a number of chronic diseases which must be managed without governing daily life. Certainly, this view reflects an optimisti assessment of Islamism and its dangers, especially since many claimed that Taliban movement was immune from Qutb’s influence, one not likely to fare well given the current trajectory of events in Afghanistan and Pakistan.

In the harvest of extremism, the question of the Afghan woman emerges with particular urgency. One recalls the words of former First Lady Mrs. Laura Bush in her radio address on November 17, 2001, in which she stated: “The war on terrorism is also a war for the rights and dignity of women.” One Afghan researcher applies a specific approach to the intellectual transformation within Taliban circles concerning women, highlighting the contradiction between Hanafi jurisprudence and its Taliban application. Indeed, history is likely to record that Afghan women, especially in the capital Kabul, paid a heavy price for the rights they acquired during the last twenty years of struggle, only to be left to the whims of an unrepentant and retrograde movement.

The Taliban have managed to survive and adapt due to political and economic entanglements over many years. But its ideological and tribal anchors have proven enduring, and some of these are inextricably intertwined with the Pakistani Taliban. One study seeks to address this relationship, stressing its deeply symbiotic nature, and noting that it has been cause of concern in Islamabad. These concerns have only worsened since the Afghan Taliban released all Pakistani Taliban members from Afghan prisons and launched a diplomatic initiative to mediate between the Pakistani government and Taliban. In a region rife with complex relationships and rivalries, the extensive border between the two countries have always been an artery for smuggling and illicit financial networks that have a vested interest in the perpetuation of the “resistance economy.”

In one 2012 study by researcher Gretchen Peters which included extensive field work,  she tackled the history of the famed Haqqani network, relying on several sources. She analyzed the network’s extensive influence and impact on current US-Afghan relations. The study demonstrates that the relationship between the Taliban and the Haqqani network is a deeply entrenched alliance unlikely to break down in the aftermath of the American withdrawal. Indeed, in certain respects, the network stands on equal footing with the Taliban, effectively dividing power and responsibilities with it.

For its part, India has expressed deep discomfort with the Taliban’s return to power, partially stemming from the belief that it will energize other radicals and terrorists in its own vicinity. New Delhi enjoyed close relations with Kabul for nearly twenty years; forging similarly warm ties with a self-declared “Islamist emirate” is a dim prospect at best. In an effort to better understand the common ground between Islamist and other violent extremist movements, one study examines the impact of public religiosity on religiously-inflected wars ostensibly waged to defend sacred sites. Such campaigns turn on mobilizing religious passion at a high level and the ability of political leaderships to direct those passions to violent ends.

Another study is devoted to the study of terrorist organizations in Mozambique, ​​specifically the Al-Shabab movement. It analyzes its subject’s origin, attitudes, economy, and the terrorism challenges it poses to the state. This subject has new salience for two reasons.  Firstly, the rise of Taliban movement, now ruling Afghanistan for the second time under a revived Islamic emirate, will inevitably exert a substantial impact on neighboring terrorist organizations. Certainly this is the case in Africa, where Islamist radicals look to Kabul as an inspiration and a model for the possibility of establishing the Islamic emirate in northern Mozambique. Secondly, ​​the withdrawal of government forces, whether American or others, offers hope that their local adversaries can also be overcome. This matter warrants further study.