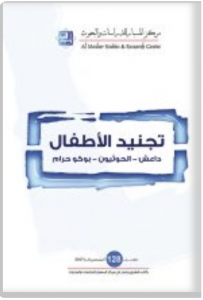 The most vulnerable victims of the scars of war — whether physical, psychological, or cultural — are children. One type of child victim is the one who is attacked. The other is the child soldier, taught to kill before attaining the maturity to understand or bear the many consequences. According to UNESCO, in more than half of the world’s conflict areas since 2003, the fighters have included children under the age of 15. Many reasons contribute to children fighting in war zones. They include the desire for food or vengeance and attempts to alleviate humiliation, frustration, or boredom. In some cases, the child is promised an educational or financial reward.

Conflicts in Africa and the Middle East have subjected children to the worst kinds of violence and blackmail. In Syria, UN reports point to the loss of a generation of children who have abandoned school and been forced to migrate or flee. Among the most dangerous results of this “war on children” has been recruitment by terrorist groups such as ISIS, Boko Haram, and the Houthis.

The Houthis exceed other militias in the region in their prolific recruitment and arming of children. Several international reports show a high increase in child recruitment, in particular, since the onset of war in Yemen in 2014. A chapter addressing the Houthi case asks why the group is keen on child recruitment and what means of persuasion are used to sway the children. The paper also asks what tasks the child recruits take on, as well as what roles the Yemeni government and civil society could potentially play in addressing the problem.

One goal shared by most armed groups in recruiting children is to guarantee a continuous stream of recruits for decades to come. One study in the book notes that ISIS, for its part, has invested in non-traditional means to attract and recruit children,  such as video games and tailored social media sites. All are available online via a range of devices including smartphones. A different chapter explores the Iraqi context, training its sights on children in the Popular Mobilization Units (al-Hashd al-Sha’abi).

Al-Shabab movement emerged in Somalia in 2006 as another major child soldier recruiter. One assessment finds that 40 percent of the armed group’s 7,-9,000 soldiers were children between the ages of 10 and 15. They have been trained to use small arms, hand grenades, and explosive devices. Al Shabab exploits poverty in Somalia, offering perks for Somali children. In recent years, Boko Haram has also resorted to kidnapping children for recruitment and fighting.

The book attempts to highlight the importance of child soldier rehabilitation after conflicts. It concludes that reintegration into society is the most difficult aspect of the challenge, requiring massive attention, energy, and dedication.

Al-Mesbar Center would like to thank all the book’s contributors — and in particular, Ibrahim Al-Nimer, who coordinated its chapters.