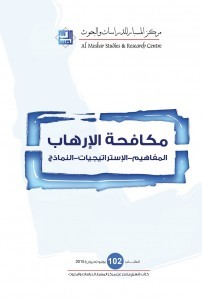 Al Mesbar’s 102nd monthly book, Counterterrorism: Concepts, Strategies, Models, examines how terrorism is being confronted both internationally and inside the Arab world. The book explores differing approaches attempting to address religious extremism, all of which tend to begin with the premise that security measures alone do not constitute an effective means to eradicate the threat.

One of the most problematic areas at the outset has been how to define “terrorism,” given the ambiguity the word conveys both conceptually and terminologically. Objective criteria are necessary to elaborate upon the term so as to distinguish between terrorism on the one hand and legitimized resistance movements on the other, as well as efforts to safeguard security and peace, and protect society in general.

One of the issues highlighted in book is the fact that the majority of international charters and treaties which addressed terrorism failed to compose a unified definition for terrorism, whereas the Arab Agreement for Combating Terrorism issued in April 1998 did offer a comprehensive definition.

From defining terrorism, the book moves on to the challenge of dismantling the discourse of the terrorists themselves, whether in the Arab world or the West. Though context and terminologies employed by the groups has evolved in recent memory, there are enduring commonalities: the exploitation of religious texts and the glamorizing of terrorist acts, all with the intention of consecrating and legitimizing religiously motivated violence to serve political ends.

Today’s jihadist movements share the aspiration of establishing and consolidating a caliphate, as well as dismantling the Westphalian order of nation-states in the world today. Strategies differ according to the theological taste, geographic factors, and contrasting priorities of these groups. But in analyzing the internal discourse if the organizations, one finds mainly superficial differences in religious ideology: There is enormous common ground between political Islamist movements claiming to be peaceful and moderate, such as the Muslim Brotherhood, and terrorist organizations which openly endorse violence activism, such as ISIS and Al-Qaeda. The common denominators consistently run deeper than most believe.

The book also begins to address the urgent need to analyze the social “values” system which motivates members of differing social classes, including middle and upper classes, to support terrorist organizations morally and financially — and the underlying social crises that engendered these “values” to begin with.  The book also poses the question as to what these drivers, inspiring the privileged to support terrorism, bring to bear on strategies of countering terrorism — and how strategies that may yield positive results in one society can be less effective in another.

Policymakers in Europe have called for ending what they see as the drivers of radicalism: discrimination, social injustice, and other legitimate grievances — whether inside or outside the European Union. They aver an intrinsic relationship between security, social justice, democracy, and development. In seeking to address these matters, European governments have cultivated ties with the Muslim communities in their own societies.

The book includes papers which seek to analyze terrorism through a variety of lenses: ideological discourse, legal dimensions, differing counterterrorism and discrete manifestations of religious violence — with a special focus on two groups which have not been adequately studied to date: Ansar Ashariah in Tunisia, and Salafist Jihadists in Morocco. And in addition to an examination of measures taken by the European Union, the book also surveys Russian policies toward similar phenomena.

The Center thanks all the experts who contributed to this volume — in particular, our colleague Omar Al-Bashir Al-Turabi, who took on the task of coordinating it.