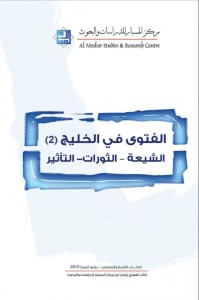 Al-Mesbar Center’s 79th monthly volume of research delves further into the realm of fatwas — Islamic religious edicts. As in last month’s edition, the research aims largely to fill a knowledge gap regarding the role state-backed “official” religion plays in affecting the mentality and deliberations of the mufti.

This volume is visibly pegged to present-day events and pressing concerns: It probes the question of how official fatwas emanating from the Gulf impact the issuing of fatwas in Egypt, Jordan, and elsewhere. It looks more specifically at the interplay between some of the Gulf’s Salafi fatwas and a society nearby that resembles the Gulf in some respects: Jordan. It seeks to understand, as well, after three years of revolutionary upheaval, the turbulence and transition within the official religious institutions of the Arab world’s enduring dynasties — a context in which Morocco naturally arises as a kingdom worth studying. Other portions of the book survey Shi’ite fatwa institutions in the Gulf, the role of fatwas among members of jihadist groups, and the treatment of women’s issues by fatwas. The volume’s “study of the month” segment — always on urgent topics not necessarily related to the other chapters — examines the present political crisis in Libya, as well as a new virulent strain of Muslim Brotherhood activism in the Gulf.

Extremist political movements that cloak themselves in religion, particularly in the Gulf states, often use deviant interpretations of Islamic texts to justify their actions. The phenomenon is examined in this volume by Fatima Kassab, assistant professor of Islamic jurisprudence at King Abdelaziz University in Jedda. Her study parses deviant jihadist interpretations of Islamic law by Al-Qaeda. She finds that the group’s “jurisprudence” uses selected texts from Islamic teachings on jihad and fighting — redacted, modified, and truncated by the movement’s clerics — to lend a veneer of religious legitimacy to its operations. The study lays bare the organization’s extremist thinking, dismantling its discourse and exposing its many false claims about Islamic law. Kassab calls for an approach to Al-Qaeda that remedies the various causes which the movement exploits — and persuades those who wish to see change in their societies that systemic reform is the most effective means of achieving it.

Jordanian researcher Muhammad al-Awawda has contributed a study of the organized practice of issuing fatwas in Jordan — an institution which he views as an administrative vestige of the Ottoman caliphate. In a brief historical departure, he first traces the evolution of “official Islam” in Jordan, noting that muftis in the country have been consistently neutral in their outlook toward the state. He next examines the position of Jordanian muftis vis a vis the country’s security apparatus, then shows how ideologies from the Gulf — notably, those propagated by Salafi groups — affect Jordanian Islam outside the realm of official institutions. Jordanian Salafi muftis, in their unofficial capacity, attract ever growing numbers of followers, he notes, but sometimes the state instrumentalizes them to advance its policies in indirect ways.

In a separate study, Cairo University professor Fatima Hafez presents her research on Gulf fatwas amid the so-called “Arab spring.” Surveying Islamic legal deliberations about the revolutions, she shows how official clerics in various Gulf states each made rational arguments, grounded in Islamic tradition, to support the position of their backers. In highlighting the contrasts between official and unofficial fatwas, Hafez raises brave questions about whether there is or can be such a hing as an independent mufti. Her paper also contains a comparison of official fatwas from various Gulf states, Salafi fatwas, and online fatwas from the high-traffic Web site “Islamweb.” All of them, she finds, were politically tainted: The Salafi material generally supported Saudi government positions on the “Arab spring,” whereas the pro-revolutionary fatwas carried by Islamweb generally reflected the views of the Qatari government. And yet, as an overall conclusion, Hafez finds that some muftis have begun to respond — albeit reluctantly — to the demands of the public itself. She conveys hope that this modest progress toward democracy will continue.

The Gulf’s sizable Shi’ite minority brings to bear a complex culture of fatwas all its own. Muhammad Mahfouz, a Saudi researcher and writer, parses the three schools of Islamic jurisprudence embraced by most Shi’ites in the Gulf: Usulism, Ikhbarism, and Shaykhism. He examines venerable muftis in each of the the three schools — Sheikh Muhammad Amin Zayn al-Din, the late Sheikh Abd al-Hadi al-Fadli, and Sheikh Hasan al-Saffar, respectively — to portray the interplay between the social needs of the society and Shi’ite legal deliberations over how best to serve them.

Lebanese researcher Rita Faraj, who also serves on Al-Mesbar Center’s editorial board, contributes an analysis of a sampling of fatwas on women’s issues by the former mufti of the Kingdom of Saudi Arabia, the late Sheikh Abd al-Aziz bin Baz. Faraj has chosen three topics about each of which Baz issued tens of fatwas: the “descent of women into working in a man’s field,” “what to do when a woman who is menstruating has touched the Qur’an,” and “covering a woman’s face.” She scrutinizes subtleties in wording and emphasis from one fatwa to the next in an attempt to deduce the societal pressures to which the material may have been a response.

Abd al-Hakim Abu ‘l-Lawz, a Moroccan scholar in the sociology of religion, contributes a paper called “The Position of Mosque Imam and the Issuing of Fatwas in Morocco.” As part of the constitutional reforms initiated by the Moroccan monarchy in recent years, the issuance of fatwas was formally subsumed under the authorities of the  kingdom’s “Supreme Scientific Council” (al-Majlis al-‘Ilmi al-‘A’la). Abu ‘l-Lawz strives to understand how Moroccan muftis navigated these reforms at a time of rapid regional and global change. Abu ‘l-Lawz’s study is followed by another contribution from Morocco, by Sa’idi Mahfuz, a scholar at Hassan II University in Casablanca. Mahfuz has been researching the politics of the so-called “classical religious training,” referred to in Morocco as Al-Ta’lim al-Atiq. Surrounding any effort at implementing systemic religious educational reform in the Arab world are a combination of factors, all of which Mahfuz takes into account here: societal demands, domestic and foreign political pressure, the clerics themselves, the Islamic affairs ministry, and finally, especially the case of Morocco, myriad unofficial clerical organizations which have become institutions in and of themselves.

This volume’s “Study of the Month” turns our attention to the political crisis in Libya. It is an analysis of differing and at times competing policy formulations by American think tanks and policymakers on how to engage the turbulent post-revolutionary country, ward off a civil war, and prevent Libya from becoming a failed state. The paper surveys proposals by various American experts and political figures on the question of whether to arm and train a Libyan army, how to integrate private militias into the institutions of state, policies toward the Libyan Muslim Brotherhood, and the distinguished role of the country’s tribes.

The book concludes with a long article by American author and researcher Joseph Braude which first appeared in the inaugural edition of the Atlantic Post — a new online journal specializing in Middle Eastern affairs. The article is an investigative report on the Muslim Brotherhood in the Gulf and the involvement of three Gulf-based Brotherhood affiliates — known as the “Ummah” parties — in the Syrian civil war. Braude identifies a new strain of the Gulf Brotherhood bent on armed attacks, the establishment of armed wings now training on Syrian soil, and the relationship between these worrisome trends and actions taken by the Muslim Brotherhood in Egypt.