Iran and the Maghreb States: The Shiite Question 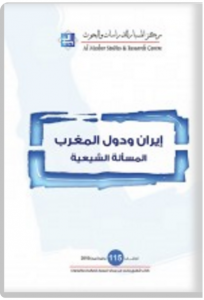 The phenomenon of Shi’ism in the Maghreb can be viewed from two angles: a cultural-religious angle and a political one. The first speaks to the motives behind conversion, whereas the second addresses the political exploitation of religious and sectarian identities. Al-Mesbar’s 115th book, for July 2016 — Iran and the Maghreb States: The Shiite Question — seeks to understand the mechanism through which religion morphs from its spiritual, moral form into a language through which to wage a political struggle.

The central question is approached in three parts. The first examines how Shi’ism has been used in Morocco, Tunisia, and Algeria as a doctrinal robe to cloak a political agenda. The second sections tracks specific instances of conversion to Shi’ism on the part of North Africans which do not, for the converts, reflect a  particular political trend — but do speak to the impact of Shi’ite proselytizing via satellite television, social media, and the public space.  The third segment focuses on how Shi’ism plays into the political relations and polarization among states in the region, as well as its impact on the status of minorities in each North African country.

There is, to be sure, a historical lens through which the Shi’ite presence in the Maghreb may be viewed. It involves the eighth-century rise of the Idrisid state in what is now Morocco, which gave allegiance to the “Ahl al-Bayt” — restricting dynastic succession to the progeny of the prophet Mohammed via his son-in-law Ali bin Abi Talib. Idris, who grew disaffected from the Abbasid caliphate to the East, was a descendant of Abdullah bin Al-Hasan Al-Muthanna, a descendant of the Prophet Muhammad by way of Ali who was born in Medina in 127 H (743 CE), a time of many conflicts over the issue of caliphal legitimacy and succession. Some scholars observe, however, that conversion to Shi’ism in North Africa was largely an elite phonemonon, itself political in nature, which did not affect majority populations. In any case, Shi’ism in various permutations endured into the rise of the Fatimid State — though its influence in the Maghreb shrank after the Fatimid caliph built the city of Cairo to serve as his capital. And indeed, it is a long way from the heyday of the Fatimid dynasty in the tenth century to the dawn of the Iranian revolution in 1979. Whatever the historical debates over pre-modern Shi’ism in the Maghreb, moreover, the modest presence of Maghrebi sympathizers with the Iranian revolution in modern times is generally ascribed to politics — a manifestation of anger toward local governments, the alliance with the United States, or both.

Yet the Iranian revolutionary regime, from its inception, has consistently been striving to export its ideology and establish alliances with various Islamist movements on the pretext of a shared outlook — through the real nature of Iran’s relations with Arab Sunni Islamism tend to exceed the ideals of ideology and doctrine. The Tehran government has also sponsored the spread of Shi’ite sectarian ideology and practice via preaching to individuals and small groups in the region. In such efforts, it has been effectively aided and abetted by the weakness of moderate Sunni leaderships, as well as the growth of radical Salafism, which provided a convenient foil for militant Shi’ism to develop its narrative.

There is also a distinction to be made between Arab Shi’ites born into the sect of generations on the one hand and more recent Sunni conversions on the others. The former category of Arab Shi’ites have in many cases held longstanding relations of solidarity with the state and its economic, political, and cultural institutions — however strained these relations sometimes became over the course of centuries. The process by which some of these Shi’ites found their way into the Iranian revolutionary orbit differs from that of Sunnis who only recently embraced Shi’ism. Most of the cases of conversion to Shi’ism which were explored in this book, it should be added, were Sunnis who had found their way to Shi’ism via Sunni Islamist groups.

This book is unprecedented, though far from comprehensive. IT aims to establish a foundation for deeper studies of the phenomenon of North Africn Shi’ism. It is also concerned with identifying policy options for Arab states to strive for civil peace in a fluid religio-political environment, as well as encourage the consecration of religious freedoms. The book does not aim to take an ideological position on the phenomenon of religious or political Shi’ism in Morocco, Tunisia, and Algeria, but rather refers to political and religious indicators that ought to be studied and analyzed.

Al-Mesbar Center would like to thank all the researchers who contributed to this volume, with special thanks to our colleague Abd al-Hakim Abu ‘l-Luz, who coordinated its production.