ISIS Incubators: The Emergence of Salafi Jihadism in Europe 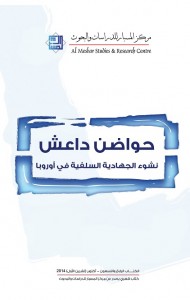 Al-Mesbar’s 94th monthly book tracks Islamist groups that have established a presence in the West. More specifically, it is concerned with groups that reject “Western civilization” and wish to “Islamize” the West — yet eschew violence in their activism.

The book analyzes the historical and ideological development of Hizb Al-Tahrir in the UK, as well the UK-based “Islam for Britain.” It also traces the relationship between the “Tanzim Al-Muhajirin” movement and violence that sprang from its teachings at the dawn of the 21st century. The book goes on to examine the Danish branch of Hizb Al-Tahrir, as well as “Al-Da’wa Al-Islamiah – Kaldit” which overlaps to a considerable degree with “Tanzim Al-Muhajirin”. In this context, the book describes the Danish public’s views of these groups, and the debate over whether to ban them.

The subject of Islamist activity in Holland is explored through research based on interviews with Islamist activists, combined with an analysis of the means by which these groups solicit and mobilize support from the country’s Muslim community. Through a similar approach, the book also explores the development of the “Shari’a for Belgica” organization in Belgium, and “Fursan Al-‘Izah” in France — the latter, a group that has manifested acute hostility toward French society. The book also contains a study of some Islamist movements in the United States.

The book approaches its subject from multiple angles: On the one hand, the research speaks to the global debate over the formulation of policies toward non-violent yet radical Islamist movements and organizations. Relatedly, it explores the role of open societies in the West as a political and intellectual haven for Islamists fleeing Arab countries. On the other hand, the book examines the people traffic that now moves in the opposite direction: Islamist radicals emanating the West who travel to Arab countries to wage “jihad.” In this context, it highlights the irony of Islamist movements in the West exporting their ideologies to Arab and Muslim countries — following decades in which it had been the latter region that was exporting ideologies to the former.

Western countries face a dilemma when dealing with radical groups and movements which do not resort to violence. Some policymakers – particularly those associated with the security sector – take the view that Islamist violence is merely the tip of the iceberg of much larger non-violent movements and organizations which inform the terrorists’ ideology. Yet they are restrained from imposing sanctions on those who promulgate radical ideas but neither practice nor incite to violence. The outcome of the Western debate about these matters carries consequences for Arab societies, inasmuch as the failure to address the problem of Islamist radicalism can yield new waves of terrorism emanating from the West. This book aspires to provide new information and insights to enrich the debate, as well as provide a deeper understanding of the movements around which the debate centers.

ISIS Incubators is also significant in light of efforts by some Arab countries to fight terrorism — in particular, Saudi Arabia, the United Arab Emirates, and Egypt. Their efforts have served increasingly to stifle political Islam and faith-based terrorism in their own countries. But many adherents to these ideologies have since fled and taken refuge in the West. They will in all likelihood play a role in political Islamist activism in their new places of refuge.

The book provides some insight into the Western-based organizations that have inspired those who come to fight in Arab countries. The phenomenon of foreign fighters in Syria, Libya, and Iraq, once a matter of secondary importance, is now a matter of overriding concern in our region, due to the large numbers of Western fighters that have joined Dai’sh, Jabhat Al-Nusra, and other terrorist organizations. Some Western Islamists are proving to be instrumental in providing technical support to these groups, particularly in the realm of social media. Arab societies stand in urgent need of information about Islamist groups in the West as we seek to formulate our own policies toward them. Questions to consider include whether and how to propose legal measures in the West that may serve to stem the growth of these movements, as well as how to formulate a new cultural approach to Muslim communities in the West, geared toward countering radicalization and fostering moderation and tolerance.

The Center would like to extend its gratitude to all the contributors who made this book possible, especially Lorenzo Vidino, who coordinated and oversaw its production; and Rasha Al-Aqeedi, who translated the material from English into Arabic.