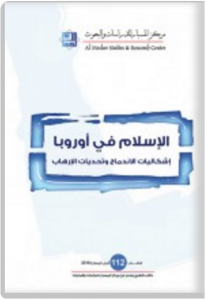 Muslims in Europe hail from diverse ethnic, racial, and cultural backgrounds. Managing such diversity is not an easy task. Further complicating the issue is the sense of isolation shared among second and third generation immigrants and the rise of Islamist sentiments. This isolation has only been exacerbated by the rise in Islamophobia, which holds all Muslims guilty by association.

The Center’s 112th “monthly book” discusses this topic in light of two major attacks that struck Europe over the course of one year: the Paris attacks (2015), and the Brussels attack (2016).

Scholars contributing to the volume tackled social, political, and cultural dimensions of the issue — including aspects of the history of Islam in Europe, the continent’s present-day Islamic institutions, immigration policies, Islamophobia, and the debate over a “European Islam.”.  Special attention is paid to France, not only because of the scale of terrorist attacks it has recently faced, but also because of the large percentage of Muslims who reside there (10% of the population).

Addressing the problem of extremism among Muslims in Europe will require numerous measures. Among them, one is to instill a more enlightened religious narrative. Another is to foster integration of Muslim communities by improving their social status and living standards as well as welcoming their political, social, and cultural participation in the country. Prospects for these advances are being undermined, however, by a rise in anti-Muslim sentiment, particularly following the mass inflow of Muslim refugees from the Arab world’s present-day conflict zones. The far right in Europe has been stoking public fears — and further isolating Muslims, whether new immigrants or citizens by birth — making them ripe and vulnerable to Islamist agendas.

Islamists pose a problem all their own, themselves exploiting the misfortune and marginalization of Muslims in some parts of Europe. And while some mosque Imams have taken the initiative to promote a tolerant dialogue based on accepting others and respecting differences, others adopt an anti-Western, anti-secular narrative in their weekly sermons.

The Center would like to thank all the experts who contributed to this month’s publication, especially Dr. Mohammed Haddad and Dr. Rita Faraj for their excellent work in coordinating the book.