Muslims in Australia: History and Policies of Multiculturalism 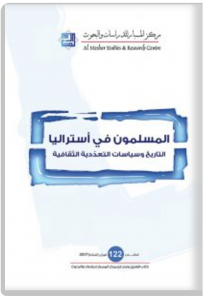 academic circles and think tanks have taken interest in Islamic studies and various Muslim minorities in Europe and America. In the last decade, scholarship on Muslim diaspora communities increased due to a variety of factors, among them mass migration, concerns of growing terrorism following the September 11, 2001 attacks, and Europe’s wariness regarding some public Islamic practices.

By comparison to European and American diaspora communities, which have been studied prolifically, Islam and Muslims in Australia have yet to receive sufficient attention from scholars. Al-Mesbar Center’s 122nd monthly book, Muslims In Australia: History and Policies of Multiculturalism, examines the topic through a series of studies: “Historic roots of Australia’s Approach to Pluralism;” “Muslim Migration to Australia: History and Contemporary Social Experiences;” “Debate on the Veil in Australia;” “Islamophobia in Australia;” “How Islamic Practices Shape Australian-Muslim Identity and Integration;” “Australian Laws and Islamic Traditions: Public’s Perceptions;” “How the Hizmet Works: Islam, Dialogue, and the Gulen Movement in Australia;” “The CDP: Ideology, Attitudes toward Muslims, and Future Directions;” and “Australian Jihadists in Syria.”

The rising trends of ethnic, religious, and racial diversity in Australia propelled its government to develop a range of policies designed to foster integration. Though for many years, Australian elites were a largely homogenous population, they were never alone. Muslims began arriving in Australia in the late 16th century, mostly of Turkish origin. From the mid-20th  century on, Arab migration increased with the growing volatility in the Middle East, which happened to coincide with a period of remarkable economic growth in Australia.

Among the vital topics in the discussion surrounding Muslims in Australia is that of Islamic practices and phenomena, such as Hijab, Halal food, and Sharia. The feeling of expanding cultural differences, ethnic and religious polarization, and conflicts over “identity” have led some to believe Australia is facing some form of internal “clash of civilizations.”

The book raises an important question: What does it mean to be Muslim from the perspective of Australian Muslims? To understand the complexities of integration within a multicultural system, it is important to adopt the pretense of regarding Muslims as part of the country’s social fabric — not newcomers — or, as French philosopher Jacques Derrida (1930-2004) might have phrased it, to terminate the “diasporic condition of the immigrants by considering them among the other who is met with a national state and identity.”

A number of Australian scholars have examined the rising tide of Islamophobia. Gary Bouma of Monash University believes Islamophobia reflects “the negative perception of Islam and Muslims in general.” He notes that the Hijab is perhaps the most overt and manifestation of Islam known to the Australian public space. Many in Australia and the West view the Hijab as a means of expressing religious identity and pride — as well as setting oneself apart from others. A majority of Australians appear to regard Islamic practices and customs as aberrant to their society, generating reactions ranging from condescension to violence.

Transnational Islamist groups, notably the Turkish “Gulen movement,” appear in such settings. Greg Barton traces the phenomenon, and how a pan-Islamist movement like the Gulenists can transcend national cultures and borders to find its way into as distant a locale as Australia.

The book discusses the rise of the far right in Australia, and its attempts to ban the niqab and restrict certain religious practices. It notes that perceptions of Muslims were adversely effected by the phenomenon of Australian jihadists  during the  Syrian civil war.

The center would like to thank all scholars who contributed to the book, and Dr. Rita Faraj for coordinating its production.