Opportunities and Challenges in the Arabian Gulf states – Volume II 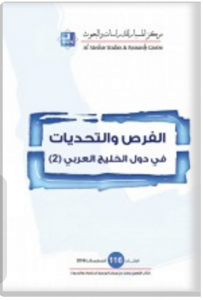 Opportunities and Challenges in the Arabian Gulf states (II), Al-Mesbar’s 116th book for August, 2016, sheds light on the most important political, economic and social issues that are now raised as challenges for GCC states, some of which were tackled in the first volume, published in April 2015.

Arabian Gulf states were able to overcome the stormy regional events of 2011-2016, even in the aftermath of political regimes’ collapse in several of the “Arab Spring” states.

The book discusses issues related to economy, politics, society, and religion in Gulf states from the angle of reformist policies. The issues explored include women’s status, economic reforms, and steps toward building a “knowledge economy.” The volume also explores the challenge of terrorism in the Gulf. The studies discuss topics directly related to implemented and formative reformations, taking into consideration hindrances, obstacles, and regional and international changes and transformations.

Religious reform is considered one of the issues of utmost importance to Gulf societies. Among the reasons is the concern about the influence of the discourse of the leaders of what is known as the “Awakening” [Sahwa]; other groups referred to in the region under the rubric of “political Islam,” and Salafi jihadist currents. The book suggests that the near absence of serious religious reform in the Gulf is connected to social and religious crises; religious reform currents that reach the level of establishing a pressuring force are yet to appear, and thus all reformation attempts are being done by individuals.

As to the status of women, GCC states have taken serious steps in the economic, developmental, and educational fields. The book’s exploration of the matter tracks degrees of political advance in light of the historical record, and profiles some of the remarkable success stories of Gulf women, including the present speaker of the UAE’s Federal National Council.

The book examines the Gulf’s economic challenges amid the drop in oil prices, the GCC states’ substantial oil reserves notwithstanding. One of the studies discusses how the economic pressures are likely to affect energy security, counterterrorism, the struggle against the Houthi insurgency, and the likelihood of lifting the international  sanctions on Iran.

Gulf states are looking for new markets. China represents an increasingly important world power to the Gulf in this respect. The book analyzes the largest persistent challenges facing Gulf and Chinese economies, reviewing the opportunities through which bilateral trade and economic cooperation can be promoted. The importance of promoting Gulf-Chinese relations is not limited to economics alone — and the book examines the interwoven political and economic factors that would make for strong and constructive Gulf-Chinese relations. The book also discusses the Gulf states’ relationships with Latin American and East Asian countries. It finds that there is a desire on the part of several Latin American and East Asian states to strengthen dialogue with Gulf states.

The Gulf states have introduced new laws and domestic procedures as part of their struggle against terrorism, as well as new policies to address its “root causes.”

A related threat to the Gulf states is the visible growth of militias in the Gulf’s immediate periphery — particularly Iraq, with its geographical proximity to Kuwait and Saudi Arabia. One study discusses the political and military circumstances that led to the emergency of the militias, their profound role in Iraq’s internal politics, and their military role in Syria.

Al-Mesbar Center would like to thank all the researchers who participated in the production of this book — with special thanks to our colleagues Ibrahim Amin Abu Nimr and Rasha Al-Aqeedi, who coordinated it.