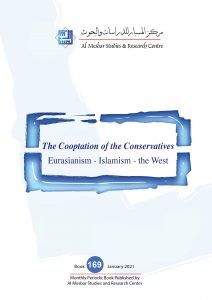 Al Mesbar Studies and Research Center, in its book The Cooptation of the Conservatives: Eurasianism – Islamism – the West (Book 169, January 2021), addresses the various permutations of ​​Russian and American conservative and traditionalist thought in their social and political contexts. It also delves into the theories of the rising Eurasianist movement, as well as the economic, political, social and cultural theories associated with it. Finally, it takes a panoramic view of the continental strategies and alliances that have emerged in recent years in connection with Russia’s project under President Vladimir Putin to restore its “imperial greatness.”

American conservatism, which the book explores in three studies, values ​​tradition and respects the cumulative political wisdom of the past. This school has, however, fallen out of favor in the context of the new, progressive administration led by President Joe Biden and his team. This should come as no surprise as, with notable exceptions, the main body of American conservatism was deeply identified with former President Donald Trump.

Meanwhile, in the Russian context, the central idea animating conservatism is more confrontational, organized around the imperative to “resist liberalism” and to maximize national power. Russian conservatism also seeks to weave together the Russian diaspora of the Soviet Union, and furnish its heirs with a renewed sense of national purpose and fortified traditional spirit.

Parallel to the Russian conservatism, as expressed by the new Eurasianism, neoconservatism emerged in the United States as a political force roughly contemporaneous to the Christian Right, which believes in extending the power and influence of the United States, and has become the most closely identified with the doctrine “American exceptionalism.”

In its examination of the subject, the book outlines how American neoconservatism emerged as a political movement in the 1960s, chiefly among the liberal hawks who found themselves alienated by the spirit of quasi-pacifism then regnant among Democratic foreign policy circles. In addition, many found themselves drawn to the rising anti-progressivism of that era, especially those galvanized by the excesses of those opposed to the Vietnam War.

Many neoconservatives believed — as one study notes — in the necessity of strengthening democracy, robust engagement in international affairs, and, in extreme circumstances, armed intervention. Along with most other substrata of American conservatism, they were staunchly anti-communist, as well as deeply skeptical of political revolutions abroad, which to them smacked of extremism and excess.

The book touches on the origins of contemporary political thought in Russia and the historic phase of its foreign policy engagement with the Middle East.

The study of today’s most prominent Russian theorist, Aleksandr Dugin, explains the pillars upon which the “fourth political theory” — as he calls it — is based. He elaborates on this theory’s vision of the Middle East, its position on political Islam, and on what he sees as “American hegemony” around the world. The “new Eurasian philosopher” left a great political influence on the Russian interior and  on key decisionmakers. His political positions and opinions earned him stiff criticism from American research centers, some of which is taken up in this book. Many considered him “the most dangerous ideologue on the planet,” described him as “Putin’s strategic mind,” and thought he was the one who shifted the focus of the “classic Eurasian” rivalry from “Roman-Germanic Europe” to America, which he views as the new center of liberal culture. In Dugin’s view, the Eurasian movement’s antagonism is to Western culture, regardless of its leadership.

The book outlines the religious and intellectual alternatives presented by the “Fourth Political Theory,” and how they are reconciled with the Russian Orthodox Church’s positions on issues of unity, tradition, and conservatism, the challenges of the times, and “postmodernity.” One of these alternatives suggests that politics should “start from the will of the human being conditioned by his spirit, not by his material needs, [and] look at the person himself as part of a challenged people or ethnicity, not as an atomized part of a group without a body, or individuals devoid of any collective identity.”

Islamist currents in Turkey and Iran tried to extend ideological bridges to forge an alliance with the Eurasian current, which they examined with great care. While the development of Dugin’s views demonstrated a positive openness towards traditional conservatism in Arab countries, serious criticism emerged from his relationship with leaders and theorists of Islamist factions in Iran and other countries because, in contrast to his ostensible views, the latter often espouse a sort of political anarchism, one that is highly revolutionary and dismissive of traditions deemed ‘heretical’.

The book praises the antiquity of Islam in Russia, and the deepening of its traditional institutions’ connection with the Middle East, through Russia’s historic missions to Al-Azhar, and elsewhere. Traditional Muslims harbored serious observations toward classical Eurasianism, due to its saturation with the Orthodox and Slavic elements. Nevertheless, they were more open to the new trend as a fellow conservative force, one subject to the religious pluralism espoused by the Russian state. Also, some of them lauded his rejection of schismatic political movements within Islam, especially extremist currents such as the Muslim Brotherhood.

The book also analyzes the social and political role of women in contemporary Russian society, and presents a comparative historical analysis between the conservative and liberal trends. The relevant study includes an observation of changes in the institution of marriage, wedding customs, and traditional weddings, taking into account the ethnic diversity (Tatars, Bashkirs and Slavs) and the character of religious pluralism (Orthodox, Muslims) in Russia. The study also examines alternative conservative ideas, such as feminist theories, the institutionalization of same-sex marriage, and other phenomena that contradict traditional family patterns.

The Al Mesbar Studies and Research Center thanks all the researchers participating in the book, especially our colleague Ahmed Lotfy Dahshan, who coordinated its production.