Western Governments and Political Islam After 2011 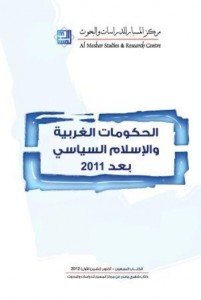 In its 70th monthly book, Al-Mesbar Studies and Research Center examines foreign governments’ attitudes toward the Arab Spring, since it broke out in Tunisia and several Arab countries; Islamist uprisings; and the ensuing dramatic revolutions. The issue also explains a new Western attitude toward the events of the Arab Spring, starting with U.S. Secretary of State Hillary Clinton saying that her country and the world didn’t expect that the Arab revolutions would throw out dictatorial tyranny only to bring in the tyranny of the mob instead. The issue’s studies explore the attitudes of eight Western governments, including the United States and Israel. The issue begins with an introduction written by Dr. Lorenzo Vidino, who confirms that the Arab Spring wasn’t Islamic initially; Vidino also goes over the themes of the issue, which attempt to examine different points of view about the Arab Spring. Vidino analyzes the reactions of eight Western countries to Islamist takeovers of authority after the Arab Spring. The first study is conducted by Steven Brooke, who summarizes the history of weak relationships between Washington and the Muslim Brotherhood. Another study, by Mancheraz Maher and Martin Frampton, discusses the history of the relationship between the British government and Islamic groups. Additionally, Royal Mayor conducts a study that deals with the politics of the Islamic experience in the Netherlands, which varies from total reservation to surprisingly openness toward the Islamic phenomenon. Jean Francois studies Islamic movements in France; he writes that France deals with the Islamic movements just to maintain its interests in the southern and eastern Mediterranean. With respect to Israel, the Arab Spring, and responses to the New Middle East, researcher Benedita Bertie believes that empowering any of the basic elements of the previous regime is a threat to regional security and stability. Therefore, Israelites have been worried from the start that Islamists might seize the protests from the people.